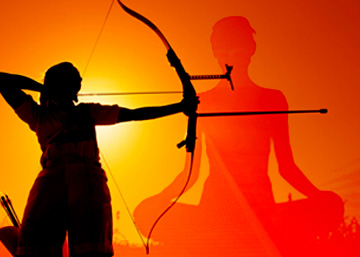 “Yoga is skill in action,” says Bhagavat Gita, the well-known Indian Scripture. But this famous verse is mostly interpreted to mean professional dexterity in action. If this is the real meaning of the verse then everyone who is professionally skillful, from the cobbler to the criminal, has to be considered as yogis. In this article, the author brings out the true and deeper meaning of Gita’s verse.

This famous line from the Gita has often been interpreted as calling for efficiency in work. Work shall not be executed in a wasteful, shabby way. It should be done with due application, concentration and speed. But that is not the real purport, especially in the context of the Doctrine of Works enunciated in the scripture.

Works are inevitable, says the text. It is a law of life that activity should go on. It is not merely manual work, physically visible activity that is meant. Work is an output of energies and that goes on on all levels of the being. The activity of thoughts in the mind, the movement of emotions in the heart, the rush of impulses in the vital, the urge for movement in the body – all these are activities that come under the broad umbrella of work. Now each action which implies a release of appropriate energies in the being, evokes a corresponding reaction in Nature. We call it karma. Every action forges its own karma, bondage. The Gita shows a way to avoid this entanglement in karmic bondage.

As long as one lives, action is unavoidable. Every one has to do it. There is, however, a skill in doing it in such a way that it does not sow the seeds of karma. It is an art of consciousness. Karma is determined by the motive, intention behind the act. When this motive is governed by personal desire, an immediate karma follows. But if the motive – factor is eliminated, if the work is done because it is to be done, kartavyam, without personal interest – then there is no karma on the personal level. In addition to this requirement, the Gita counsels an offering of the act to the Divine in a spirit of consecration. So done, instead of becoming a link in the chain of karma, action turns into a means of liberation. Each work offered to the Master of the being in devotion, as a form of self-giving, leads the doer one step nearer the Divine. As things progress in this direction, the sense of the doer gets replaced by the consciousness of the instrument. The culmination comes when the person becomes totally identified with the Divine Shakti that works through him. He becomes one with the Divine Consciousness.

Though his external being may be engaged in works, his inner being remains serene and uninvolved. This is the state of inaction in action. We may remark in passing that this is a state different from the one in which in a seeming inaction there is action: outwardly there is no activity, but in the mind, in the vital, there is furious surge of energies.

Thus kausalam, in the oft-quoted line from the Gita, does not mean skill, cleverness, super-efficiency, but the art of avoiding karma even when engaged in activity: inaction in action.