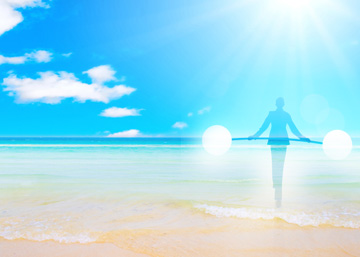 The discipline of Equanimity is an integral part of the path of karmayoga. This great Indian discipline has a living relevance for the modern corporate executive because it can make her inwardly immune to the shocks, swings and turbulence of the outer world. However, what is needed in karmayoga is not a passive equanimity which meekly accepts failure, falsehood or illness under the excuse of equality. It must be a dynamic equanimity which is inwardly calm and undisturbed but at the same time responds to each situation according to its unique needs or truth in it.

To be calm and equal under all circumstances; to be equal to success and failure but not to accept failure as final; to be equal and impartial to all but at the same time loyal to truth; three paths to equanimity: endurance of the hero; resignation of the saint; impartiality of the sage.

To Be Calm And Equal Under All Circumstances

Equality means a quiet and unmoved mind and vital, it means not to be touched or disturbed by things that happen or things said or done to you, but to look at them with a straight look, free from the distortions created by personal feeling, and to try to understand what is behind them, why they happen, what is to be learnt from them, what is it in oneself which they are cast against and what inner profit or progress one can make out of them; it means self-mastery over the vital movements, – anger and sensitiveness and pride as well as desire and the rest, – not to let them get hold of the emotional being and disturb the inner peace, not to speak and act in the rush and impulsion of these things, always to act and speak out of a calm inner poise of the spirit. It is not easy to have this equality in any full perfect measure, but one should always try more and more to make it the basis of one’s inner state and outer movements.

Equality means another thing – to have an equal view of men and their nature and acts and the forces that move them; it helps one to see the truth about them by pushing away from the mind all personal feeling in one’s seeing and judgment and even all the mental bias. Personal feeling always distorts and makes one see in men’s actions, not only the actions themselves, but things behind them which, more often than not, are not there. Misunderstanding, misjudgment which could have been avoided are the result; things of small consequence assume larger proportions.

I have seen that more than half of the untoward happenings of this kind in life are due to this cause. But in ordinary life personal feeling and sensitiveness are a constant part of human nature and may be needed there for self-defence, although, I think, even there, a strong, large and equal attitude towards men and things would be a much better line of defence. But for a sadhak, to surmount them and live rather in the calm strength of the spirit is an essential part of his progress.

There can be no firm foundation in sadhana without equality, samata. Whatever the unpleasantness of circumstances, however disagreeable the conduct of others, you must learn to receive them with a perfect calm and without any disturbing reaction. These things are the test of equality. It is easy to be calm and equal when things go well and people and circumstances are pleasant; it is when they are the opposite that the completeness of the calm, peace, equality can be tested, reinforced, made perfect.

Equality is a very important part of this yoga; it is necessary to keep equality under pain and suffering – and that means to endure firmly and calmly, not to be restless or troubled or depressed or despondent, to go on with a steady faith in the Divine Will. But equality does not include inert acceptance. If, for instance, there is temporary failure of some endeavour in the sadhana, one has to keep equality, not to be troubled or despondent, but one has not to accept the failure as an indication of the Divine Will and give up the endeavour. You ought rather to find out the reason and meaning of the failure and go forward in faith towards victory. So with illness – you have not to be troubled, shaken or restless, but you have not to accept illness as the Divine Will, but rather look upon it as an imperfection of the body to be got rid of as you try to get rid of vital imperfections or mental errors.

No doubt, hatred and cursing are not the proper attitude. It is true also that to look upon all things and all people with a calm and clear vision, to be uninvolved and impartial in one’s judgments is a quite proper yogic attitude. A condition of perfect samata can be established in which one sees all as equal, friends and enemies included, and is not disturbed by what men do or by what happens.

The question is whether this is all that is demanded from us. If so, then the general attitude will be of a neutral indifference to everything. But the Gita, which strongly insists on a perfect and absolute samata, goes on to say, “Fight, destroy the adversary, conquer.” If there is no kind of general action wanted, no loyalty to Truth as against Falsehood except for one’s personal sadhana, no will for the Truth to conquer, then the samata of indifference will suffice. But here there is a work to be done, a Truth to be established against which immense forces are arranged, invisible forces which can use visible things and persons and actions for their instruments. If one is among the disciples, the seekers of this Truth, one has to take sides for the Truth, to stand against the forces that attack it and seek to stifle it. Arjuna wanted not to stand for either side, to refuse any action of hostility even against assailants; Sri Krishna, who insisted so much on samata, strongly rebuked his attitude and insisted equally on his fighting the adversary. “Have samata,” he said, “and seeing clearly the Truth, fight.” Therefore to take sides with the Truth and to refuse to concede anything to the Falsehood that attacks, to be unflinchingly loyal and against the hostiles and the attackers, is not inconsistent with equality.

The Path of the Hero

This equality cannot come except by a protracted ordeal and patient self-discipline; so long as desire is strong, equality cannot come at all except in periods of quiescence and the fatigue of desire, and it is then more likely to be an inert indifference or desire’s recoil from itself than the true calm and the positive spiritual oneness. Moreover, this discipline or this growth into equality of spirit has its necessary epochs and stages. Ordinarily we have to begin with a period of endurance; for we must learn to confront, to suffer and to assimilate all contacts. Each fibre in us must be taught not to wince away from that which pains and repels and not to run eagerly towards that which pleases and attracts, but rather to accept, to face, to bear and to conquer. All touches we must be strong to bear, not only those that are proper and personal to us but those born of our sympathy or our conflict with the worlds around, above or below us and with their peoples. We shall endure tranquilly the action and impact on us of men and things and forces, the pressure of the Gods and the assaults of Titans; we shall face and engulf in the unstirred seas of our spirit all that can possibly come to us down the ways of the soul’s infinite experience. This is the stoical period of the preparation of equality, its most elementary and yet its heroic age.

The Way of the Saint

But this steadfast endurance of the flesh and heart and mind must be reinforced by a sustained sense of spiritual submission to a divine Will: this living clay must yield not only with a stern or courageous acquiescence, but with knowledge or with resignation, even in suffering, to the touch of the divine Hand that is preparing its perfection. A sage, a devout or even a tender stoicism of the God-lover is possible, and these are better than the merely pagan self-reliant endurance which may lend itself to a too great hardening of the vessel of God: for this kind prepares the strength that is capable of wisdom and of love; its tranquillity is a deeply moved calm that passes easily into bliss. The gain of this period of resignation and endurance is the soul’s strength equal to all shocks and contacts.

The Poise of the Sage

There is next a period of high-seated impartiality and indifference in which the soul becomes free from exultation and depression and escapes from the snare of the eagerness of joy as from the dark net of the pangs of grief and suffering. All things and persons and forces, all thoughts and feelings and sensations and actions, one’s own no less than those of others, are regarded from above by a spirit that remains intact and immutable and is not disturbed by these things. This is the philosophic period of the preparation of equality, a wide and august movement. But indifference must not settle into an inert turning away from action and experience; it must not be an aversion born of weariness, disgust and distaste, a recoil of disappointed or satiated desire, the sullenness of a baffled and dissatisfied egoism forced back from its passionate aims. These recoils come inevitably in the unripe soul and may in some way help the progress by a discouragement of the eager desire-driven vital nature, but they are not the perfection towards which we labour. The indifference or the impartiality that we must seek after is a calm superiority of the high-seated soul above the contacts of things; it regards and accepts or rejects them but is not moved in the rejection and is not subjected by the acceptance. It begins to feel itself near, kin to, one with a silent Self and Spirit self-existent and separate from the workings of Nature which it supports and makes possible, part of or merged in the motionless calm Reality that transcends the motion and action of the universe. The gain of this period of high transcendence is the soul’s peace unrocked and unshaken by the pleasant ripplings or by the tempestuous waves and billows of the world’s movement.