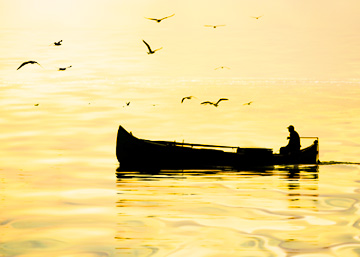 Real activity, which is the goal of Vedanta, is combined with eternal calmness, the calmness which cannot be ruffled, the balance of mind which is never disturbed, whatever happens. And we all know from our experience in life that that is the best attitude for work.

Agitation and restlessness of our surface being, which pretends to be active, “I am very busy, I don’t have time,” leads only to dilution and dissipation of the quality of creative energy. The true action which leads to great quality and creative perfection comes only from a deep calm and silence. So, we must reserve some time everyday to cultivate and establish silence in our inner being. And in our daily life and work, we must learn to step back into this calm whenever we are disturbed and act from this inner silence.

Illusion of action; creative silence; step back; entering into silence; action in silence.

Agitation, haste, restlessness lead nowhere. It is foam on the sea; it is a great fuss that stops with itself. Men have a feeling that if they are not all the time running about and bursting into fits of feverish activity, they are doing nothing. It is an illusion to think that all these so-called movements change things. It is merely taking a cup and beating the water in it; the water is moved about, but it is not changed for all your beating. This illusion of action is one of the greatest illusions of human nature. It hurts progress because it brings on you the necessity of rushing always into some excited movement. If you could only perceive the illusion and see how useless it all is, how it changes nothing! Nowhere can you achieve anything by it. Those who are thus rushing about are the tools of forces that make them dance for their own amusement. And they are not forces of the best quality either.

Whatever has been done in the world has been done by the very few who can stand outside the action in silence; for it is they who are the instruments of the Divine Power. They are dynamic agents, conscious instruments; they bring down the forces that change the world. Things can be done in that way, not by a restless activity. In peace, in silence and in quietness the world was built; and each time that something is to be truly built, it is in peace and silence and quietness that it must be done. It is ignorance to believe that you must run from morning to night and labour at all sorts of futile things in order to do something for the world.

Once you step back from these whirling forces into quiet regions, you see how great is the illusion! Humanity appears to you like a mass of blind creatures rushing about without knowing what they do or why they do it and only knocking and stumbling against each other. And it is this that they call action and life! It is empty agitation, not action, not true life.

I said once that, to speak usefully for ten minutes, you should remain silent for ten days. I could add that, to act usefully for one day, you should keep quiet for a year! Of course, I am not speaking of the ordinary day-to-day acts that are needed for the common external life, but of those who have or believe that they have something to do for the world. And the silence I speak of is the inner quietude that those alone have who can act without being identified with their action, merged into it and blinded and deafened by the noise and form of their own movement.

Most of you live on the surface of your being, exposed to the touch of external influences. You live almost projected, as it were, outside your own body, and when you meet some unpleasant being similarly projected you get upset. The whole trouble arises out of your not being accustomed to stepping back. You must always step back into yourself – learn to go deep within – step back and you will be safe. Do not lend yourself to the superficial forces which move in the outside world. Even if you are in a hurry to do something, step back for a while and you will discover to your surprise how much sooner and with what greater success your work can be done. If someone is angry with you, do not be caught in his vibrations but simply step back and his anger, finding no support or response, will vanish. Always keep your peace, resist all temptation to lose it. Never decide anything without stepping back, never speak a word without stepping back, never throw yourself into action without stepping back.

All that belongs to the ordinary world is impermanent and fugitive, so there is nothing in it worth getting upset about. What is lasting, eternal, immortal and infinite – that indeed is worth having, worth conquering, worth possessing. It is Divine Light, Divine Love, Divine Life – it is also Supreme Peace, Perfect Joy and All-Mastery upon earth with the Complete Manifestation as the crowning. When you get the sense of the relativity of things, then whatever happens you can step back and look; you can remain quiet and call on the Divine Force and wait for an answer. Then you will know exactly what to do. Remember, therefore, that you cannot receive the answer before you are very peaceful. Practise that inner peace, make at least a small beginning and go on in your practice until it becomes a habit with you.

The first step is a quiet mind – silence is a further step, but quietude must be there; and by a quiet mind I mean a mental consciousness within which sees thoughts arrive to it and move about but does not itself feel that it is thinking or identifying itself with the thoughts or call them its own. Thoughts, mental movements may pass through it as wayfarers appear and pass from elsewhere through a silent country – the quiet mind observes them or does not care to observe them, but, in either case, does not become active or lose its quietude. Silence is more than quietude; it can be gained by banishing thought altogether from the inner mind keeping it voiceless or quite outside; but more easily it is established by a descent from above – one feels it coming down, entering and occupying or surrounding the personal consciousness which then tends to merge itself in the vast impersonal silence.

To quiet the mind in such a way that no thoughts will come is not easy and usually takes time. The most necessary thing is to feel a quietude in the mind so that if thoughts come they do not disturb or hold the mind or make it follow them, but simply cross and pass away. The Silence is always good; but I do not mean by quietness of mind entire silence. I mean a mind free from disturbance and trouble, steady, light and glad so as to open to the Force that will change the nature. The important thing is to get rid of the habit of the invasion of troubling thoughts, wrong feelings, confusion of ideas, unhappy movements. These disturb the nature and cloud it and make it difficult for the Force to work; when the mind is quiet and at peace; the Force can work more easily. It should be possible to see things that have to be changed in you without being upset or depressed.

It is not easy to get into the Silence. That is only possible by throwing out all mental-vital activities. It is easier to let the Silence descend into you, i.e., to open yourself and let it descend. The way to do this and the way to call down the higher powers is the same. It is to remain quiet at the time of meditation, not fighting with the mind or making mental efforts to pull down the Power or the Silence but keeping only a silent will and aspiration for them. If the mind is active one has to learn to look at it, drawn back and not giving any sanction from within, until its habitual or mechanical activities begin to fall quiet for want of support from within. If it is too persistent, a steady rejection without strain or struggle is the one thing to be done.

A quiet mind does not involve itself in its thoughts or get run away with by them; it stands back, detaches itself, lets them pass, without identifying itself, without making them its own. It becomes the witness mind watching the thoughts when necessary, but able to turn away from them and receive from within and from above. Silence is good, but absolute silence is not indispensable, at least at this stage. I do not know that to wrestle with the mind to make it quiet is of much use, usually the mind gets the better at that game. It is this standing back, detaching oneself, getting the power to listen to something else, other than the thoughts of the external mind that is the easier way. At the same time one can look up as it were, imaging to oneself the Force as there just above and calling it down or quietly expecting its help. That is how most people do it, till the mind falls gradually quiet or silent of itself, or else silence begins to descend from above. But it is important not to allow the depression or despair to come in because there is no immediate success; that can only make things difficult and stop any progress that is preparing.

We can have an activity perfect enough in outward appearance along with an entire inner passivity, peace, mental silence, indifference and cessation of the emotions, absence of choice in the will.

It is a remarkable fact that the speech, writing and intelligent actions of such a state may convey a perfect force of thought, luminous, faultless, logical, inspired, perfectly adapting means to ends, far beyond what the man himself could have done in his old normal poise of mind and will and capacity, yet all the time he himself perceives but does not conceive the thought that comes to him, observes in its works but does not appropriate or use the will that acts through him, witnesses but does not claim as his own the powers which play upon the world through him as through a passive channel. But this phenomenon is not really abnormal or contrary to the general law of things. For do we not see a perfect working of the secret universal Will and Intelligence in the apparently brute (jada) action of material Nature? And it is precisely this universal Will and Intelligence which thus acts through the calm, indifferent and inwardly silent Yogin who offers no obstacle of limited and ignorant personal will and intelligence to its operations. He dwells in the silent Self; he allows the active Brahman to work through his natural instruments, accepting impartially, without participation, the formations of its universal force and knowledge.

This status of an inner passivity and an outer action independent of each other is a state of entire spiritual freedom. The Yogin, as the Gita says, even in acting does no actions, for it is not he, but universal Nature directed by the Lord of Nature which is at work. He is not bound by his works, nor do they leave any after effects or consequences in his mind, nor cling to or leave any mark on his soul; they vanish and are dissolved by their very execution and leave the immutable self unaffected and the soul unmodified.