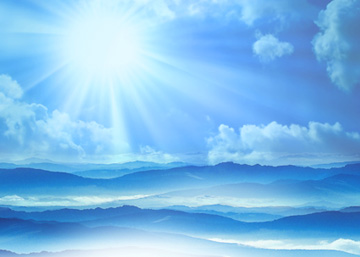 Beyond the rational mind, there are various levels of spiritual mind, which are intrinsically intuitive. There is a level of intuition just beyond the rational mind in which truth is revealed through a luminous and direct insight in thought. There is a higher level in which we can “see” the truth though inner vision. There is a still higher level in which we can “hear” the vibration of truth through our inner ear. While the inner vision reveals the light body of truth, the inner hearing reveals its sound body. At the higher levels of spiritual mind intuition becomes global. The integral truth of Man, God and the World are known in their interconnected unity, wholeness and totality in a cosmic consciousness. In the higher levels of intuitive consciousness, the experiences of our senses, emotions and intellect, the three levels or dimensions of our ordinary mentality are at once fused, synthesizes and transcended in a fourth dimension of experience. In this poetic profile, Sri Aurobindo describes in exquisite muse the various aspects and levels of spiritual intuition.

(First in the ascending ladder is the one in which the thinking mind is illumined with a direct insight beyond reason and the deeper, universal truths of life and spirit are revealed through luminous thought.)

A cosmic Thought spreads out its vastitudes;
Its smallest parts are here philosophies
Challenging with their detailed immensity,
Each figuring an omniscient scheme of things

(In this level, truth is not merely thought-out but also visible. The hidden and invisible realities and forces behind outer appearances become visible to the illumined inner vision of the seer.)

But higher still can climb the ascending light;
There are vasts of vision and eternal suns,
Oceans of an immortal luminousness,
Flame-hills assaulting heaven with their peaks,
There dwelling all becomes a blaze of sight;
A burning head of vision leads the mind,
Thought trails behind it its long comet tail;
The heart glows, an illuminate and seer,
And sense is kindled into identity.

The Home of Intuition

(This is the very source of intuition. All the levels of spiritual mind are intuitive, but here this faculty exists in its natural fullness and perfection. This higher form of spiritual intuition tears the veil of ignorance and reveals the deeper and invisible realities behind outer appearances)

A highest flight climbs to a deepest view:
In a wide opening of its native sky
Intuition’s lightnings range in a bright pack
Hunting all hidden truths out of their lairs,
Its fiery edge of seeing absolute
Cleaves into locked unknown retreats of self,
Rummages the sky-recesses of the brain,
Lights up the occult chambers of the heart;
Its spear-point ictus of discovery
Pressed on the cover of name, the screen of form,
Strips bare the secret soul of all that is.
Thought there has revelation’s sun-bright eyes;
The Word, a mighty and inspiring Voice,
Enters Truth’s inmost cabin of privacy
And tears away the veil from God and life…

Each shape showed its occult design, unveiled
God’s meaning in it for which it was made
And the vivid splendour of his artist thought

The Voice of Inspiration

(This is another intuitive faculty or state of consciousness inwhich truth is not only thought or seen but also “heard” in the inner year in the form of inspired word.)

Oft inspiration with her lightning feet,
A sudden messenger from the all-seeing tops,
Traversed the soundless corridors of his mind
Bringing her rhythmic sense of hidden things.
A music spoke transcending mortal speech.
As if from a golden phial of the All-Bliss,
A joy of light, a joy of sudden sight,
A rapture of the thrilled undying Word
Poured into his heart as into an empty cup,
A repetition of God’s first delight
Creating in a young and virgin Time.
In a brief moment caught, a little space,
All-Knowledge packed into great wordless thoughts
Lodged in the expectant stillness of his depths…
A crystal of the ultimate Absolute,
A portion of the inexpressible Truth
Revealed by silence to the silent soul…
She brought immortal words to mortal men.

Mind of the Gods

(This is the highest level of the spiritual mind and the home of cosmic godheads who sustain the worlds.)

Then stretches the boundless finite’s last expanse,
The cosmic empire of the Overmind,
Time’s buffer state bordering Eternity,
Too vast for the experience of man’s soul:
All here gathers beneath one golden sky:
The Powers that build the cosmos station take
In its house of infinite possibility;
Each god from there builds his own nature’s world;
Ideas are phalanxed like a group of suns,
Each marshalling his company of rays.
Thought crowds in masses seized by one regard;
All Time is one body, Space a single look:
There is the Godhead’s universal gaze
And there the boundaries of immortal Mind:
The line that parts and joins the hemispheres
Closes in on the labour of the Gods
Fencing eternity from the toil of Time.