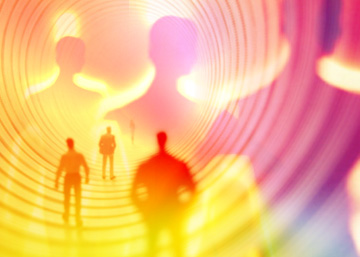 All beings are to the Indian mind portions of the Divine, evolving souls, and sure of an eventual salvation and release into the spirit… But actually in life there are infinite differences between man and man; some are more inwardly evolved, others are less mature, many if not most are infant souls incapable of great steps and difficult efforts. Each needs to be dealt with according to his nature and his soul stature.

The Indian thought perceived the spiritual equality of all human being. But at the same time it recognised with an unsentimental practicality the actual inequality in character, temperament and capacity. Based on this balanced perspective Indian thinkers charted a path of human development based on the principle of graded idealism.

Every man should take up his own ideal and endeavour to accomplish it. That is a surer way of progress than taking up other men’s ideals, which he can never hope to accomplish. For instance, we take a child and at once give him the task of walking twenty miles. Either the little one dies, or one in a thousand crawls the twenty miles, to reach the end exhausted and half-dead. That is like what we generally try to do with the world. All the men and women, in any society, are not of the same mind, capacity, or of the same power to do things; they must have different ideals, and we have no right to sneer at any ideal. Let everyone do the best he can for realising his own ideal. Nor is it right that I should be judged by your standard or you by mine. The apple tree should not be judged by the standard of the oak, nor the oak by that of the apple. To judge the apple tree you must take the apple standard, and for the oak, its own standard.

Unity in variety is the plan of creation. However men and women may vary individually, there is unity in the background. The different individual characters and classes of men and women are natural variations in creation. Hence, we ought not to judge them by the same standard or put the same ideal before them. Such a course creates only an unnatural struggle, and the result is that man begins to hate himself and is hindered from becoming religious and good. Our duty is to encourage everyone in his struggle to live up to his own highest ideal, and strive at the same time to make the ideal as near as possible to the truth.