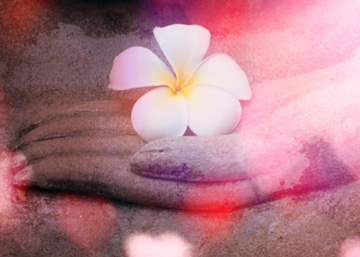 The true science of charity lies in knowing how to channelise and distribute the universal forces for the well-being of all.

At present charity is considered almost exclusively from the external standpoint and the word is synonymous with the sharing of part of one’s possessions with life’s rejects. We shall see in a moment how mean this conception is even when confined to the purely material field.

The three other modes of action of charity are admirably summed up in this counsel given by the Buddha to his disciples:

“With your hearts overflowing with compassion, go forth into this world torn by pain, be instructors, and wherever the darkness of ignorance rules, there light a torch.”

To instruct those who know less, to give to those who do evil the strength to come out of their error, to console those who suffer, these are all occupations of charity rightly understood.

Thus charity, regarded from the individual point of view, consists, for each one, of giving to others all they need, in proportion to one’s means.

This brings us to two observations.

The first is that one cannot give what one does not have at one’s command.

Materially this is so evident that it is unnecessary to insist upon it. But intellectually, spiritually, the same rule holds true.

And the supreme charity, which is integral self-giving to the great work of terrestrial regeneration, implies first of all that one can command what one wants to offer, that is to say, that one is master of oneself.

Only he who has perfect self-control can consecrate himself in all sincerity to the great work. For he alone knows that no contrary will, no unexpected impulse can ever again come to impede his action, to check his effort by setting him at variance with himself.

In this fact we find the justification of the old proverb which says: “Charity begins at home.”

This maxim seems to encourage every kind of egoism, and yet it is the expression of a great wisdom for one who understands it rightly.

It is because charitable people fail to conform to this principle that their efforts so often remain unfruitful, that their goodwill is so often warped in its results, and that, in the end, they are forced to renounce a charity which, because it has not been rightly exercised, is the cause of nothing but confusion, suffering and disillusionment.

There is evidently a wrong way of interpreting this maxim, which says, “First let us accumulate fortune, intelligence, health, love, energies of all kinds, then we shall distribute them.”

For, from the material standpoint, when will the accumulation stop? One who acquires the habit of piling up never finds his pile big enough.

I have even been led to make an observation about this: that in most men generosity seems to exist in inverse proportion to their pecuniary resources.

From observing the way in which workmen, the needy and all the unfortunate act among themselves, I was forced to conclude that the poor are far more charitable, far more prepared to succour their fellow-sufferers than are those more favoured by fortune. There is not enough time to go into the details of all that I have seen, but I assure you that it is instructive. I can, in any case, assure you that if the rich, in proportion to what they have, gave as much as the poor, soon there would no longer be a single starving person in the world.

Thus gold seems to attract gold, and nothing would be more fatal than wanting to accumulate riches before distributing them.

But also, nothing would be more fatal than a rash prodigality which, from lack of discernment, would squander a fortune without benefiting anyone.

Let us never confuse disinterestedness, which is one of the conditions of true charity, with a lack of concern that springs from idle thoughtlessness.

Let us learn therefore to make judicious use of what we may have or earn while giving the least possible play to our personality and, above all, let us not forget that charity should not be confined to material aid.

Nor in the field of forces is it possible to accumulate, for receptivity occurs in proportion to expenditure: the more one expends usefully, the more one makes oneself capable of receiving. Thus the intelligence one can acquire is proportionate to the intelligence one uses. We are formed to manifest a certain quantity of intellectual forces, but if we develop ourselves mentally, if we put our brains to work, if we meditate regularly and above all if we make others benefit by the fruit, however modest, of our efforts, we make ourselves capable of receiving a greater quantity of ever deeper and purer intellectual forces. And the same holds true for love and spirituality.

We are like channels: if we do not allow what they have received to pour out freely, not only do they become blocked and no longer receive anything, but what they contain will spoil. If, on the contrary, we allow all this flood of vital, intellectual and spiritual forces to flow abundantly, if by impersonalizing ourselves we know how to connect our little individuality to the great universal current, what we give will be returned to us a hundredfold.

To know how not to cut ourselves off from the great universal current, to be a link in the chain which must not be broken, this is the true science, the very key of charity.