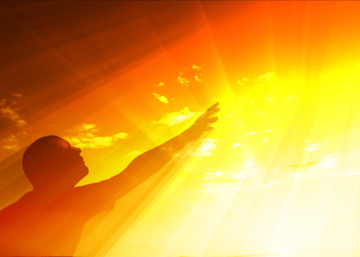 Some inner attitudes which can accelerate our spiritual growth.

Importance of the Inner State

Does conduct build up attitude or attitude shape conduct? Actually it is possible to formulate a code of conduct which need have little to do with a person’s true attitude. He may adopt certain ethical rules of conduct and run his external life on those lines. He may be polite and correct in his dealings with others; he may not allow himself to be provoked into rough behaviour. But within he may have a different flow of feeling altogether. His attitude to life may make a distinction between life outside and his own mental formulation.

By and large the attitude of a person influences his reactions to men and things. But this attitude itself is a product of his inner state. Conduct is the outermost part of life. Attitude is something psychological. The inner state is basic at any rate to the spiritual seeker. He makes a distinction between ethical standards and spiritual principles. The ethical conduct may prepare for spiritual living but it is not the same.

The seeker works to live from within outwards. He forms his attitudes in conformity with his inner state and governs his external conduct accordingly. In other words, he forges a harmony between his inner being, his mental outlook and daily conduct in life. He lays more importance on the inner state than on outer expression. If the inner state is stable and poised in the right consciousness, the outer life tends automatically to express it in conduct.

The governing principle should be spiritual. There must be enough sincerity in the being to ensure that there is no gulf between the inner and the outer conditions. It is of capital importance in this context to develop a psychic control. The psychic, as we know, never errs.(1) It has a spontaneous discrimination between what is right and what is wrong and its message gets through if the vital and the mind have been trained enough not to interfere. One does not need to weigh the pros and cons according to the ruling ethical codes. What is spiritually right expresses itself through feeling, thought and action. Let us remember that what is spiritual does not conflict with true ethics. Conventional norms of ethical conduct cease to be relevant once the spiritual poise is established.

Faith in the Divine

It is now an accepted axiom in modern psychology that a positive attitude to life helps to make things easier to live with. When we look at events and circumstances with a faith that there is a Divine Providence that guides in the long run and therefore what happens is for our ultimate good, the brighter side of life preponderates over the darker in our vision and experience. Even when the going is hard, we know it is only a phase and that at the end of the tunnel is light. Such an attitude builds a cheerful outlook which is healthy for ourselves and for those who live with us.

In spiritual life faith in the Divine is a must. The sadhaka recognises a supreme Divine Will and submits himself to it. Whatever takes place, he knows it is permitted by the Divine and he also knows that eventually it contributes to the Purpose. Indeed, it is not enough if it is only a mental attitude. The mind may understand and intellectually accept a certain attitude. But unless it is shared by the other parts of the being, it is not likely to help in shaping his inner life. The emotional being, the vital and even the physical have their own inherent impressions, samskaras and they have to be educated in accepting the attitude which the mind knows to be right. The emotions go berserk each time anything goes counter to their choice, whatever the approach of the mind be. Similarly the vital overpowers with its push and forces its way despite the disapproval of the mind. It is hardest with the physical. Being nearer the inconscient, it is deeply rooted in inertia and looks upon every change as a threat. It has a poor opinion of the wisdom of the mind. It casts its long shadow on the workings of the mind and influences its attitudes in ‘practical’ matters.

It is a sadhana by itself to get these parts of the being to accept and share in the attitude of a healthy mind. It takes long. But if the will is strong, they fall in line and there is sunshine.

Seeing God in Others

How do you do that? Especially when you are face to face with an embodiment of wickedness, someone who is cruel to the bones, a beast in human form? The facts are too forbidding to permit any divinity in the person. Even as a mental notion, it does not work. And still the time-honoured counsel to the seeker is to regard the Divine in all.

Bear in mind that a person as he appears or functions is not all of himself. Behind the exterior, there is something that sustains him through all his perversities. There is a soul which is not touched by any of the outer deformations. Sri Aurobindo describes how when he had the realisation of Lord Vasudeva, the Universal Divine, in Alipore jail, he literally beheld the Lord in everyone around, including the convicts in whose ‘misused bodies’, he saw the unmistakable God.

What is required is a conviction that God dwells in everyone. This must be built into a strong faith in the being. Next, one must unlearn the habit of stopping the gaze at appearances. The sight must bore through apparent contradictions to what is at the core. In other words the consciousness must be developed. Whether in the mind or in the heart, the consciousness must be widened and deepened so that it does not get blinded or halted at the surface levels but takes a larger and deeper view of things. It must be cultured to translate its theoretical knowledge into practice.

Further, the psychic must be made more and more active. It must be drawn out and helped to extend its influence in daily life. The psychic is divine by nature and it vibrates to the presence of the Divine everywhere. It looks for the Presence and informs the other members of the being. Even when the instrumental faculties are blinded by happenings and appearances, the psychic sends up its message. The seeker learns to listen to it and probe deeper for the truth of things. Unregenerate human nature deforms the becoming of the evolving soul. It falsifies the impulse of the soul. But this does not extinguish the light within, however small. It may be covered as with smoke but it exists nevertheless. Spiritual sight is fixed on this truth of divinity at the core and is not deflected by misleading signals on the surface.

Naturally the seeker recognises the full extent of the deformation. But on that account he does not condemn outright. He learns to understand the causes of such deviations and has more of compassion than censure in his attitude. He looks for some saving feature in the offending party through which he contacts the Divinity deep within. Such a regard has a double effect: it elevates the consciousness of the seeker; it also draws out the best in the other, by and by, and prepares for a change in him.

1. The term “psychic” in the Integral Psychology of Sri Aurobindo, refers to the evolving spiritual element in the human organism, beyond its body, life and mind.