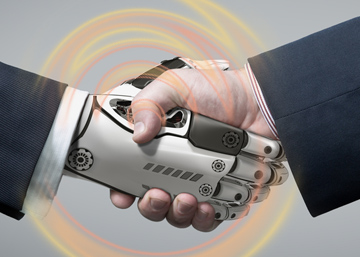 A new trend which is debated and discussed intensely and extensively in the media is the increasing influx of Artificial Intelligence (AI) and robots in to the workplace. Many tasks which require a certain amount of human intelligence and skill can now be done by these ‘intelligent’ machines. If this trend continues, along with rapid advancement in AI, what is the position of the human worker? Will she be progressively replaced by machine intelligence? How can we, humans working in offices and factories, cope with this new trend? These are the main questions explored in some detail in two brilliant articles in Harvard Business Review, with the cover page title ‘Meet Your New Employee: How to Manage the Man–Machine–Interaction’. This essay is a review of these articles in the light of a deeper perspective. The wider evolutionary perspective on the possibility of super-intelligent machines was discussed in some detail in an earlier article in this blog (‘The Next Step in Evolution: Superman or a Super Machine’). This article examines the man–machine interaction in the corporate context.

In a thoughtful interview in Harvard Business Review, Erik Brynjolfsson and Andrew McAfee, faculty members at MIT Sloan School of Management, state what lies ahead: “Nothing is sacrosanct: Machine are beginning to make inroads in areas involving creativity, dexterity and emotional perceptiveness.” According to Brynjolfsson and McAfee, this will be the new or second machine age. The first one is the Industrial Revolution when steam engines replaced muscle power. In the second machine age, AI and Robots are racing ahead to replace brainpower. Here are some interesting and also alarming perspectives from the researchers of MIT Sloan School of Management.

In this scenario of the second machine age, what is left for humans? Obviously, highly skilled, specialized and innovative professional in AI and digital technology will be in great demand. Apart from this technical domain, Brynjolfsson and McAfee indicate three more areas where humans have a distinctive edge over AI—at least at present or in the near future. They are as follows:

The next practical question is how we humans can cope with this future secretion. The traditional or general attitude of the corporate manager to machines tends towards replacing men or processes with machines. Here comes an interesting and a very different perspective from Brynjolfsson who says:

“The intellectually easy thing to do is to look at an existing process and says: how can I have a machine do part of the job? It does take a certain amount of creativity and a little bit of work to do that, and it does create value. However, it takes a lot more creativity to say: How can I have the machine and the human work together to do something never done before and create something that will be more valuable in the workplace.”

In other words, instead of asking how to replace humans with machines, how to have both in a mutually complementing manner so that together they can create something more than what they can produce individually. This is an important point which has to be explored extensively if we want to make the second machine age into a creative epoch for human education. In another article in Harvard Business Review, Thomas H. Davenport and Julia Kirby discuss this perspective in some detail. Here are some interesting points highlighted by Davenport and Julia:

How to implement this augmentation strategy? For the individual employee, Thomas Davenport and Julia Kirby suggest the following steps.

The last three steps belong to the technical domain, which are undoubtedly helpful to cope with the new machine age. However, lasting remedy lies in developing facilities which cannot be substituted by the machine in the near future.

The first two domains highlighted by Brynjolfsson and McAfee and also the first two steps suggested by Davenport and Julia indicate the faculties to be focused not only to remain ahead but also to work in attunement with the machine. In a deeper and broader psychological perspectival, we have to develop the intuition or imagination in the following domains.

As we progress in these higher levels of awareness and understanding, we will know how to connect thing, ideas, people, processes and machine in an all-inclusive, mutually supportive and complementing harmony, which no AI, present or future can do.

At the collective dimension, awakening and development of these higher faculties beyond the logical and machine intelligence have to become part of education and training at the national as well organizational strategies. The students of AI in educational institutions have to be sensitized to the human dimensions of it in such a way they have the broadness of vision, insights and compassion to make the man–machine interaction a creative whole, working together in a complementing harmony.