Fourth Dimension Inc. > Organisational Effectiveness > Chemistry of Teamwork – I Towards a Holistic Approach 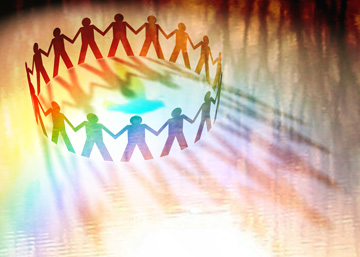 Individual empowerment and collective teamwork: these are the two factors, which need to be reconciled for the full realization of the human potential in an organization. The guiding principle for empowerment is Liberty and for teamwork it is Fraternity. Thus we have here a social and political problem to be solved through practical synthesis in the modern work environment. This article examines some of the current thinking on teamwork in the light of integral management.

The key to the full realization of the individual potential is professional liberty which empowers the individual to express his talent and capacities in a free and unfettered manner and contribute to the realization of organizational goal. The key to the realization of the collective potential lies in forging fraternity, which leads to inner and outer solidarity and harmony among people. In terms of performance this task of forging fraternity has two aspects or facets: first is to create a harmonious and complementing mutuality of knowledge, skill and competencies which leads to a resonance of collective energies of people; second is to create a dynamic whole of collective action which is more than the sum of individual action or contribution. And from a psychosocial perspective, creating fraternity means forging an inner and outer bonding among people, which is not dependent on professional relations in work or common corporate goals. The fraternity of high performance requires an understanding of the professional interdependence of people in their work-life and makes it more and more efficient, productive and effective. The other and deeper psychological fraternities require an understanding of collective or communal psychology and apply it to create an inner unity in the mind, heart and soul of people or in other words unity of consciousness.

However, most of the corporate thinking on teamwork is performance oriented. In a predominantly performance-oriented approach to team building the primary emphasis on target-oriented performance and the main query is what are the factors which lead to a high performance team. There is at present a growing and voluminous literature on this subject, not only from management scholars but also from sports personalities. We present here a brief summary of the conclusions from some of the seminal studies on the subject.

A team is a small number of people with complementary skill, a set of performance goals, and an approach for which they hold themselves responsible. A high performance team is made of following features:

Commitment to a common purpose, vision or mission shared and believed by all members and translated into specific and well-defined performance targets.

Sufficient freedom and flexibility to team members to achieve the targeted goals.

A value-system that encourages listening and responding constructively to others views; providing helpful support to others; recognizing the interests and achievement of others; openness and transparency in communication; and mutual respect and trust.

Leadership which shares information, trusts in others abilities to make decision, shares power with other team members and has the ability to acquire, retain and nurture the needed talent and skill in the team.(1)

However, in a predominantly performance oriented approach to team-building the central strategic aim is to channelise the knowledge, talents and skills of people in mutually complementing manner towards common goal. This approach makes no conscious effort to create a social and psychological unity or solidarity among team members. Whatever moral, psychological or social factors which emerge like trust or common goals are considered as secondary or necessary aids in serving the overriding goal of performance.

The factor of performance is undoubtedly important in business. But what is not recognized clearly is that a predominantly performance oriented approach limits the moral and psychological potential of the team; it cannot create entirely that whole which is greater than the sum of its parts because the entire creative energy of the collectivity is not fully engaged. To achieve this higher potential greater attention has to be bestowed in understanding, nurturing, deepening and strengthening the social, moral and psychological dimension of team building.