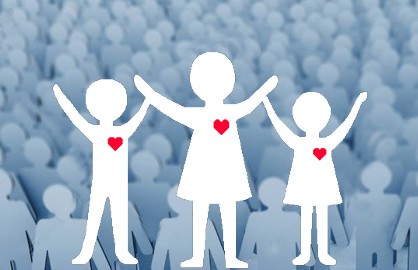 (A higher aspiration beyond the mundane and the material, individual or collective, can be a great power for evolution and transformation. This article examines briefly this possibility and its implications for the higher evolution of humanity.)

We are able reach the Moon, explore Mars, and send rockets to Plato and Jupiter. But we are not able to create even a small community based on true love, which is a greater achievement, with much more positive consequences for humanity and our planet, than walking on the Moon.

We are part of a world linked together and governed by the laws of unity and interdependence. Whatever realizations or achievements that we are able to accomplish in our inner being or outer life tend to reproduce itself in other centers of human life. If we are able to create a community, even a small one, made of ten or twelve people who are bound together inwardly by true love, kindness, understanding, acceptance, we are making a great contribution to the higher evolution of humanity, because, as we have indicated earlier, such inner realizations tend to multiply itself in many human centers. These communities of higher aspiration need not necessarily be separate institutions. They can be a small group within a larger organization—pursuing some material or economic aims, for example, a business organization—practicing this higher aspiration, meeting human goals regularly and sharing their experiences.

This kind of inner realization in a collectivity, even in a small one, may be difficult to achieve. But if a community is making a sincere, persistent and progressive effort towards these higher ideals, it is doing a great service to humanity because the vibrations sent out by this effort and aspiration has positive terrestrial consequences. Such communities of eminent aspirations organized around higher ideals like love, truth, beauty, harmony, unity, selfless service or the source of all these values, the Divine, can unleash a subtle and powerful transforming impact on human life. As Mother of Sri Aurobindo Ashram explains:

Such communities are usually formed by voluntary association of like-minded people with no support or help from the larger society or the government. But when they are actively supported and encouraged by an enlightened society and government awakened to these higher ideals and deeper truths of life, it will be a great and decisive movement in the higher evolution of our human society towards its spiritual destiny. In their present condition, most of our communities and governments are at a low level of inner awakening, governed primarily by individual and collective self-interest and driven by economic and political motives. It is less difficult to build an awakened society than to create an enlightened government, because the consciousness of political establishment is not only low but also dark with falsehood. On the other hand, the social organism, what is now called in modern thought as the ‘civil society’, contains a large number of higher aspirations working for a higher social, moral or spiritual cause, such as NGOs and individuals who work for noble causes. And there is that great power of the civil society: education. If we can build a new system of education which can create this inner awakening and aspiration among people and spread it widely among the masses, then we need not bother much about the condition of politics and government, because it creates an enlightened civil society with a large number of individuals and communities of higher aspiration, spearheading human evolution towards its higher destiny.