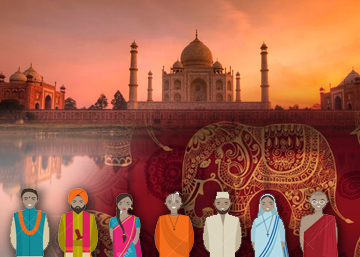 The culture of a people may be roughly described as the expression of a consciousness of life which formulates itself in three aspects. There is a side of thought, of ideal, of upward will and the soul’s aspiration; there is a side of creative self-expression and appreciative aesthesis, intelligence and imagination; and there is a side of practical and outward formulation. A people’s philosophy and higher thinking give us its mind’s purest, largest and most general formulation of its consciousness of life and its dynamic view of existence. Its religion formulates the most intense form of its upward will and the soul’s aspirations towards the fulfilment of its highest ideal and impulse. Its art, poetry, literature provide for us the creative expression and impression of its intuition, imagination, vital turn and creative intelligence. Its society and politics provide in their forms an outward frame in which the more external life works out what it can of its inspiring ideal and of its special character and nature under the difficulties of the environment. We can see how much it has taken of the crude material of living, what it has done with it, how it has shaped as much of it as possible into some reflection of its guiding consciousness and deeper spirit. None of them express the whole secret spirit behind, but they derive from it their main ideas and their cultural character. Together they make up its soul, mind and body. In Indian civilisation philosophy and religion, philosophy made dynamic by religion, religion enlightened by philosophy have led, the rest follow as best they can. This is indeed its first distinctive character, which it shares with the more developed Asiatic peoples, but has carried to an extraordinary degree of thoroughgoing pervasiveness.