Fourth Dimension Inc. > Society and Culture > The Next Step in Evolution: Superman or a Supermachine 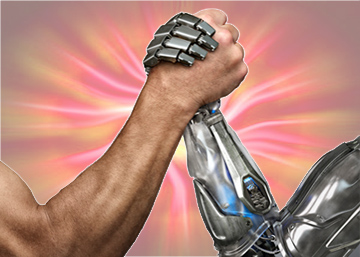 ‘Goodbye Humans: Are We Creating the Engines of Our Own Demise’… this is the title of a special issue of an Information Technology magazine. Such thinking can no longer be dismissed as a mere fantasy of sci-fi. Many influential scientific thinkers such as Stephen Hawking are talking on these lines. The main question debated at present: Can machine intelligence exceed the capabilities of human intelligence, and as a result human beings surpassed by super machines? This article examines this question in the light of a deeper evolutionary perspective.

Let us first examine the superman scenario before coming to the ‘supermachine’ fantasy. Most of the debate on this question of superman or supermachine assumes that our evolution depends entirely on humans, human intelligence or its clones, which is not entirely true. The evolution of our planet is guided and determined by higher cosmic powers beyond puny human intelligence. We may call it ‘Nature’, ‘God’ or ‘Divinity’. This ‘SuperPower’ has a plan for the future evolution of human race, and what is forecasted in that plan will happen. We, humans, as self-conscious creatures with a modicum of free will, can give our conscious consent to this plan and participate consciously in steering our higher evolution into the future or reject it and face the adverse consequences. Legendary civilizations, namely the Atlantis or Lemuria, which disappeared without a trace give an indication of what may happen if we reject or work against the Divine Plan.

Many seers and intuitive minds all over the world and in various epochs in human history, who have developed faculties beyond and above human reason or scientific mind, have perceived with more or less clarity that the next step in evolution will be a new species with a consciousness of a higher dimension than the human mind, which Sri Aurobindo calls the ‘Supermind’ or ‘Supramental Consciousness’. It is a consciousness in which the three aspects of the Deity—Wisdom, Power and Love—merge and where all the higher values and aspirations of humanity such as truth, beauty, goodness, harmony and unity are not mere abstractions or impressions but part of the very substance of consciousness. The essence of this consciousness is a ‘Oneness’ where we can feel the entire creation as a part of our own self, in the very substance of our being, as concretely as we feel our body as our own self, and a universal Love and Compassion which flows from this unity-consciousness.

In this superman scenario, a new ‘civilization’ and a new ‘species’ living united with this higher Consciousness is envisaged as the next step in evolution. Our present human species will be called upon to rise to this higher consciousness through a science and technology of consciousness. If we accept this call and take the path towards this future evolution, our primary occupation will be not on developing more and more intelligent machines, but on awakening and development of the deeper and higher layers of consciousness within us, and above our mind, and their greater powers and potentialities. The key to this higher evolution lies not in Artificial Intelligence (AI) but in developing our ‘Real’ intelligence, which means purification, widening, refinement and elevation of our human intelligence to higher and higher levels of awareness and cognition. In such a civilization, machines, however super intelligent they may be, will have no chance for dominating our life. On the contrary our dependence on machines will be reduced to a minimum and they will play a very subordinate role as instruments of our consciousness.

The Superrobot scenario argues that when this attempt to infuse more and more intelligence into the machine progresses at the present pace, a day may come when machine intelligence will exceed the intelligence of humans. Since most of these machine intelligences of the future will be self-learning system, they will not need humans to infuse intelligence into them. They will do it themselves and also faster and better than humans. This may lead to a supermachine or a community of such machines the intelligence of which will exceed that of humans manifold, and as a result the possibility that these super-intelligence Frankenstein machines will assume control over our earthly life. As Elan Musk, a leading exponent of this scenario says “One can imagine AI outsmarting financial markets, out inventing human researchers, out manipulating human leaders and developing weapons we cannot even imagine.”3

But there is another school of thought in AI which dismisses this supermachine scenario as belonging more to fiction than to facts. In an article in Technology Review, discussing the possibility of ‘super-intelligent machines’ taking over our earth, Will Night states: “Technical progress doesn’t justify such doomsday fears, just yet.”4 Similarly, a team of scholars at the University of Sussex state that a machine can never fully replicate human intelligence, let alone surpass it, because intelligence of humans is not only logic and analysis but also emotion and empathy with an ability to comprehend concepts like trust, intuition and faith, which a machine can never grasp.

In an Indian IT magazine, Aravinth Regidi argues that most of the achievements of AI systems at present are the result of enormous computational power of algorithms rather than on intelligence. “AI is still too much in a nascent stage to consider the possibility of its sentience anytime soon,” says Regidi and concludes: “So far, the so-called AI of today is just a bunch of algorithms designed to interpret and respond to a very very finite subset of data in extremely controlled and limiting environment… Will AI be a better strategist, a better chef, a better painter, a singer? [I]t is within the realm of possibility but not yet.”5

However, there are research projects in some leading universities in the West trying to stimulate the terrestrial and human evolution which gave birth to the human intelligence. If this attempt succeeds, we may have a machine intelligence very close to and resemble human intelligence which is not only cognitive but also emotive.

I feel the superman scenario is more in harmony with the evolutionary logic of Nature and the unmanifest potentialities of human beings. Let us look briefly at this evolutionary logic based in the light of a consciousness perspective of Indian spiritual paradigm.

In this Indian paradigm, a supreme, supramental and eternal consciousness is the source of creation and evolution and all the energies in man and the universe—physical, vital, mental and spiritual. Terrestrial evolution is nothing but a progressive manifestation of this consciousness through Matter, Life and Mind and back to its original supramental source. This consciousness is there involved in Matter, evolves a little in the plant as the sensitive vital response to the environment, emerges further as the sense-conscious animal mind and moving forward becomes the self-conscious rational mind in man. There are different forms of submental unthinking or subhuman consciousness in the atom and the plant or the animal. Similarly there are ranges of supramental consciousness beyond the human mind which will be the next step in human evolution. These intuitions of Indian spiritual thought are beginning to be recognized in modern science. For example, E. H. Walker, a quantum physicist, talks about the possibility that fundamental units of matter could be an “almost unlimited conscious, usually unthinking entities”. It is more or less well known that plants respond to human care and good music and many articles and books are written on this theme with facts and examples but the traditional scientific establishments refuse to recognize it. Similarly all recent research on animal cognition are tending towards the conclusion there is not such a great gulf between human consciousness and that of the more advanced animal species like dolphins or chimpanzees. Some of the dolphin researchers are of the view that this cetacean species is as intelligent as humans.

In this consciousness paradigm, a machine with a human-like intelligence is not such an impossible or outlandish proposition. Self-conscious rational intelligence of humans can be viewed as a potentiality in universal consciousness. According to a school of Indian philosophy called the ‘Sankhyas’, intelligence or budhi is in its origin an impersonal cosmic principle in the universal Mind of Nature. In the course of planetary evolution this principle manifests when it finds a terrestrial organism which is ready to express it. Similarly, an ancient Indian parable in the Upanishad says that the ‘Purusha’—the eternal universal conscious being—was first presented with many animal forms such as a horse, dog and elephant but he didn’t accept them. But when the form of man was presented, Purusha said, “Yes, this is good” and entered into it.

Nature has created the human form and a brain to manifest the principle or potential of intelligence. If human being can create a machine with a brain mechanism similar to that of humans, then the same potential of intelligence in the universal Mind can manifest in the machine. Since most of the latest research in AI aims at stimulating the human brain and the process of evolution in the machine, a machine-intelligence resembling human intelligence is very much in the realm of the possible. Another important point to note here is that in the Indian perspective a thought or an idea is not an abstraction but mental energy. In the mental word, a thought or an idea, especially those with a strong thought power, is a living conscious entity with an urge to realize itself in the material world. The AI movement with its ideal of creating a human-like machine, worked upon by some of the most brilliant minds of our age, is a very powerful mental formation with a great force for realization. If these intelligent machines become self-learning, which means if they are taught to learn from past experiences along with their enormous information processing and computational power, they may one day exceed human intelligence which is the basis of all scary ‘goodbye human’ scenarios.

How to prevent such undesirable possibilities? AI thinkers suggest that sufficient safeguards have to be incorporated into the AI programmes so that these machines remain always obedient to humans. This can be done. But a much better safeguard is what we have indicated earlier in our discussions on the superman scenario; it is to develop our own real human intelligence, elevate it to higher and higher levels and make it more and more luminous, powerful, wider and wiser than the machine intelligence. We have to focus our attention on developing those higher levels of our intelligence like the intuitive, holistic, ethical, aesthetic, cosmic and spiritual which AI cannot reach. In fact, the best safe guard is to incorporate the superman scenario into all our AI systems so that the machines we create however super intelligent it becomes, remains always as our helpers and collaborators in our higher evolution.