Fourth Dimension Inc. > Society and Culture > Rise of the Better Half in Business 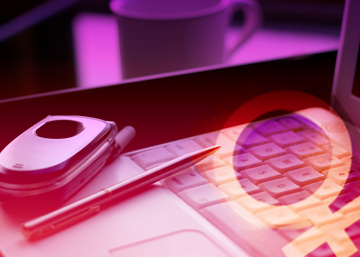 The growing presence of woman is an irresistible mega trend of the future. This article examines this trend in business and its implications for management.

The futurist John Nisbet, tracing the emerging trend in society states “Right across the board women are emerging in leadership positions”. Here are some statistics on the subject taken from a leading Indian business daily.

In US, 34 percent of women work in professional specialty or executive, administrative and managerial job, compared with 30 percent of men.

40 percent of businesses in the US are women owned.

More than 50 percent of all management and professional positions are held by women and many of the companies being run by woman-heads are out performing those without woman-heads.

In India, women are at the top in ICICI Bank, Axis Bank, HSBC, Morgan Stanley UBS and Biocon Ltd.

Further research and studies on the impact of this trend in terms of values, qualities and better results have found that:

Women add value to any task assigned to them with their own special, personal, emotional and functional attributes.

Women are more goal-driven, more responsive to co-workers, customers and stakeholders and more capable of getting the best out of them than men who are self-centered and careerist.

But the top management positions in the corporate world still remain predominantly the bastions of male power, and prejudice. For example, less than 4% of top executive in fortune 500 companies are women. However, the situation may change in the future because the emerging corporate culture requires more the qualities of the woman-leader than that of the traditional male leadership.

The old management culture is based on the principles of centralized command and control, rigid hierarchies, concentration of power in a few leaders and managers, power flowing from position and authority and unilateral imposition of decisions from the top. But the new and emerging management culture is based on the principles of decentralization, delegation of authority and decision-making to front-line worker, flat and flexible hierarchy, leading by co-operation, consensus and consultation. All these new corporate values have a greater affinity to the intrinsic nature and the core competence of the women-leader. As Angela Coyle, Professor at the Organizational Development Centre at the City University, London explains:

“A decentralized organization needs a more democratic rather than heroic leader. One who believes in consensus as opposed to a direct approach, makes use of personal credibility rather than status and position and seeks advice as opposed to providing solutions to every problem. In other words, the old models of the expert manager have given way to the model of developer-manager an archetype that befits women-mangers because of their work-type and skill-sets.”

In a speech given by Subroto Bagchi, the co-founder of a software consultancy firm, Mind-tree, in the NASSCOM IT Women Leadership Summit, he talks about eight themes that define the board room of the future: multi-disciplinary view of business; capacity to understand process; understand innovation; sustainability; emotional infrastructure; governance; environment. And in his concluding remarks, Bagchi states:

“Now let me ask you to step back and ask a fundamental question, between the two genders which one has a natural flair for these eight? Yes, indeed these eight elements are inherently feminine; they ask for a nurturing view of the future and ask us to take a long view of time. Suddenly, as if, the corporation, the male bastion of greed is discovering its feminine side which alone could make it whole.”

The last sentence in the above passage gives the psychological and evolutionary significance of the emergence of woman-power in the corporate world. Until now or recently the corporate world was governed predominantly by the male psyche and its values like aggression, competition, greed, domination, authority, hierarchy, individualism, rationality and unemotional impersonality. It is an arid culture lacking in beauty and grace. The emergence of women-power will restore the psychological balance by bringing the nurturing values of the feminine psyche, like harmony, cooperation, consensus, compassion, beauty and grace. However for this to happen, the women-leaders should not succumb to the temptation of following blindly the male prototype, but retain her inherent nature and core competence.

What are the practical conclusions we can draw from the above discussion? They are simple to know but difficult to put into practice. The first conclusion is that those organizations, which were able to harness the unique potentialities of woman through woman-friendly policies, will gain competitive as well as evolutionary advantage. For when our values and actions are in harmony with the intentions of Nature, we are open to the creative energies of nature which leads to not only practical benefits in the bottom-line but also accelerates our higher evolution. But what do we mean by woman-friendly policies? Externally it means to create an environment which is favourable to the personal as well as professional development of woman and which helps her to integrate her professional life with her personal life.

These factors apply not only to woman but also to all members of the corporate community. However women have some special needs and responsibilities like motherhood, childcare, family, which have to be given careful consideration for fully harnessing the feminine advantage. Sylvia Hewlett in her book “Off-ramps and On-ramps” discusses the critical question what could be done to retain talented woman in the workplace. Sylvia stresses on the need to understand that woman have a different set of responsibilities in their personal lives, which percolate into their work lives. This calls for a more flexible work situation for woman to accommodate their wide-ranging responsibilities like bearing child, caring for aging parents and many other household demands.

Here is an example of work-life balance with a feminist touch. S. C. Johnson company in Racine, Wisconsin, has long been at the forefront in woman-friendly practices. Ten years ago, it opened a state-of-the-art day-care centre, which has been expanding ever since. “In addition to day care for babies, we now have a full-day kindergarten, before and after school programmes”, says Helen Johnson-Leipold, vice-president of worldwide marketing and a fifth generation member of the company’s founding family. But that is just the beginning. S. C. Johnson recently set up lactation rooms so new mothers can nurse their infants. Many employees work staggered hours, others telecommute one or more days a week. Parents are permitted to work part-time for a stint after the birth of a child. And managers are trained to be sensitive to workers’ family needs. “We try not to schedule a meeting very early in the morning, or very late in the day,” says Johnson-Leipold. These policies are not merely a good-hearted gesture. Johnson-Leipold, whose youngest child, now three, is in the day-care centre, notes that the company’s turnover rate is only five percent less than half the national average. “We have realized it makes good business sense,” she says.