Fourth Dimension Inc. > Society and Culture > Woman and the Future 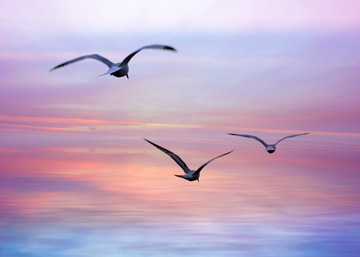 What is the unique role of woman in building the future world? This article examines this question in an evolutionary perspective.

We are living in an exceptional time at an exceptional turning point of the world’s history. Never before, perhaps, did mankind pass through such a dark period of hatred, bloodshed and confusion. And, at the same time, never had such a strong, such an ardent hope awakened in the hearts of the people. Indeed, if we listen to our heart’s voice, we immediately perceive that we are, more or less consciously, waiting for a new reign of justice, of beauty, of harmonious good-will and fraternity. And this seems in complete contradiction with the actual state of the world. But we all know that never is the night so dark as before the dawn. May not this darkness, then, be the sign of an approaching dawn? And as never was night so complete, so terrifying, maybe never will dawn have been so bright, so pure, so illuminating as the coming one…. After the bad dreams of the night the world will awaken to a new consciousness.

The civilisation which is ending now in such a dramatic way was based on the power of mind, mind dealing with matter and life. What it has been to the world, we have not to discuss here. But a new reign is coming, that of the Spirit: after the human, the divine.

Yet, if we have been fortunate enough to live on earth at such a stupendous, a unique time as this one, is it sufficient to stand and watch the unfolding events? All those who feel that their heart extends further than the limits of their own person and family, that their thought embraces more than small personal interests and local conventions, all those, in short, who realize that they belong not to themselves, or to their family, or even to their country, but to God who manifests Himself in all countries, through mankind, these, indeed, know that they must rise and set to work for the sake of humanity, for the advent of the Dawn.

The Role of Womanhood

And in this momentous, endless, many-sided work, what can be the part of womanhood? It is true that, as soon as great events and works are in question, the custom is to relegate women to a corner with a smile of patronising contempt which means: this is not your business, poor, feeble, futile creatures…. And women, submissive, childlike, lazy perhaps, have accepted, at least in many countries, this deplorable state of things. I dare to say that they are wrong. In the life of the future, there shall be no more room for such division, such disequilibrium between the masculine and the feminine. The true relation of the two sexes is an equal footing of mutual help and close collaboration.

And from now, we must reassume our veritable position, take again our due place and assert our real importance-that of spiritual former and educator. Indeed, some men, perhaps a little vainglorious of their so-called advantages, may despise the apparent weakness of women (although even this exterior weakness is not quite certain) but: “Do what he may, the superman will have to be born of woman all the same”, someone said very rightly.

The superman shall be born of woman, this is a big unquestionable truth; but it is not enough to be proud of this truth, we must clearly understand what it means, become aware of the responsibility it creates, and learn to face earnestly the task which is put before us. This task is precisely our most important share in the present world-wide work.

For that, we must first understand-at least in their broad lines-what are the means by which the present chaos and obscurity can be transformed into light and harmony.

Many means have been suggested: political, social, ethical, even religious…. Indeed, none of these seem sufficient to face with any reliable success the magnitude of the task to be done. Only a new spiritual influx, creating in man a new consciousness, can overcome the enormous mass of difficulties barring the way of the workers. A new spiritual light, a manifestation upon earth of some divine force unknown until now, a Thought of God, new for us, descending into this world and taking a new form here.

And here we come back to our starting point, to our duty of true maternity. For this form meant to manifest the spiritual force capable of transforming the earth’s present conditions, this new form, who is to construct it if not the women?

Thus we see that at this critical period of the world’s life it is no longer sufficient to give birth to a being in whom our highest personal ideal is manifested; we must strive to find out what is the future type, whose advent Nature is planning. It is no longer sufficient to form a man similar to the greatest men we have heard of or known, or even greater, more accomplished and gifted than they; we must strive to come in touch mentally, by the constant aspiration of our thought and will, with the supreme possibility which, exceeding all human measures and features, will give birth to the superman.