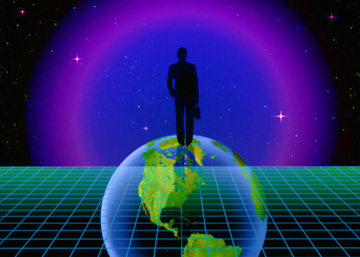 Science and Technology alone cannot solve the problems of the new millennium. We need some higher guidance for our action which must be based on the values of philosophy, ethics and religion.

There are conflicting demands on science that cannot be satisfied at the same time. I am convinced that by purely rational thinking, based on the value-free laws of science, we cannot find ultimate solutions and we cannot create a lasting global order that prevents violent conflicts. Let me cite the prediction of Hal Prince that fits into this context:

Science and technology alone cannot solve the problems of the new millennium. We need additional guidelines for our actions, for the selection of our research projects and research goals. These guidelines have to do with ethics, with philosophy, and with faith. We do not have to reinvent ethics. Our ethical systems already have a many thousand years old tradition. They are the lasting foundations of human civilization. These value systems are or have been imbedded in a liturgical context of very varied forms, ranging from very elementary, animistic and schamanistic manifestations to highly sophisticated, esoteric and intellectual edifices.

Many of us scientists have a split and ambivalent relation to the spiritual aspects of existence. Some of us are completely disinterested in religion and spirituality, and refuse to even think about these subjects. Others are pronounced atheists, finding only contradictions between belief and knowledge. A few are true agnostics claiming that a proof of the existence of supernatural forces is forever out of our reach. And, finally, many scientists lead truly a double life, adhering to a rather simple-minded belief on Sunday and acting in a strictly rational manner on weekdays. While the total rejection of religious considerations is more frequent in Europe, many American scientists and nonscientific citizens are subjected to the mentioned schism. Just watch for a few hours American TV and you will realize what I am speaking about.

Reading about eastern religions, about Hinduism and Buddhism, which I know particularly in its Tibetan Lamaistic form, and its form of Zen Buddhism, I came to the conclusion that these philosophies can more easily be amalgamated with our scientific edifice. The ethical principles behind and also some of the religious concepts are more open-minded to be combined with other systems of value. They appear to be less exclusive than our western monotheistic religions, which have led and are still leading to cruel religious wars. Indeed, I have found many Indians and Japanese scientists who are perhaps more mature personalities than can easily be found among western scientists. But unfortunately, I had to learn that these sages also form a very small minority, and the rest tries to imitate our Western superficiality.

The knowledge of historical religions and philosophies is often quite meager also in Asia, although some superficial traditional rituals may still be obeyed in their daily life, often perhaps more due to convenience and opportunism than to personal conviction. After all, why should one not take advantage of the pre-established privileges provided by a traditional society?

Why do I put so much emphasis on the schism between science and the spiritual aspects of life? The reason for this is my conviction that even more important than further support of pure and detached science is to achieve an integration of the two apparently diverging aspects. It is hard to believe that the enormous scientific and technological development of the past two hundred years should have no influence on our ethical system of values. It is even harder to believe that three to four thousand years of philosophical and religious development should not deeply influence our attitude towards nature, and science and technology. I am convinced that we all are called to devote part of our mental efforts to achieve progress in the direction of establishing a unified ethical system of values which may serve as a basis for a future beneficial development of science and society on a global scale.

I do not think that this task is easy. I do not even think that it can be completed, once and for ever. It rather marks a process than an achievable goal, a process which will occupy mankind for as long as it will exist. We should not hope for an ingenious inventor of a new system. We have many discouraging examples in the past where individuals or small groups of intellectuals tried to create revolutionary noble rules for society. Certainly the most prominent examples are Marx and Engels laying the foundations of communism. But we might also mention the Islamic Republic in Iran, the Taliban’s in Afghanistan, and the cultural revolution in China, initiated by Mao and his clique. This is certainly not the way to proceed. What we need is not a new set of dogmatic absolute laws, but rather a flexible ethical foundation with very basic concepts which are not in conflict with more exclusive humanistic traditions or with modern science.

I would just like to advocate that we engrave into our brain the need for such a development, and that we actively undertake considerations into this direction. I would like to propose to include in scientific congresses and meetings, sessions, lectures, or discussion groups on ethical issues of science and society. The scientific community should actively contribute towards a renewed ethical basis of a technology and science-supported global society.

Richard Robert Ernst (born August 14, 1933) is a Swiss physical chemist and Nobel Laureate. Born in Winterthur, Switzerland, Ernst was awarded the Nobel Prize in Chemistry in 1991 for his contributions towards the development of Fourier Transform nuclear magnetic resonance spectroscopy while at Varian Associates, Palo Alto and the subsequent development of multi-dimensional NMR techniques. These underpin applications of NMR both to chemistry (NMR spectroscopy) and to medicine (MRI). He also received Louisa Gross Horwitz Prize in 1991.