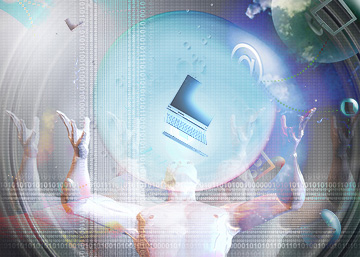 IT is undoubtedly a powerful instrument of knowledge and has the potential to create a knowledge-society, which means a world governed by knowledge. This brings us to the question what is the type of knowledge or knowledge-society which can prepare and eventually change human nature and therefore truly change everything, and how IT can help in disseminating this higher knowledge? What is a true knowledge-society? This article examines this question in the light of a spiritual vision.

A society in which knowledge is used mainly for a more efficient and productive pursuit of wealth, power, enjoyment or the corporate bottomlines cannot be called a knowledge-society; it is still a utilitarian society. In a higher perspective, a true knowledge-society is the one in which knowledge and learning is the dominant motive of humanity; it will be a society in which knowledge is sought not only or mainly for the practical benefits it brings, but for the joy of knowledge, and for a better understanding of the higher laws, aims and values of life and organize the outer life according to this higher understanding. In such a society, the motives of power, wealth and vital enjoyment are subordinated to these higher motives of knowledge and not the other way round as it is happening now. In other words, in a true knowledge-society, education, research, and culture, and not economics, business and politics, will be the dominant social organ. IT in such a society will be an instrument mainly of culture and not controlled by commerce as it is now.

Here again, we would like to clarify some of the possible doubts, misconceptions or misunderstandings which may arise regarding our conception of the knowledge-society. We are not making any condemnatory moral judgement on the motives of wealth, power, pragmatic knowledge and enjoyment, or on the organs of wealth and power, that is Business and Politics. The motives of power, wealth and enjoyment are some of the psychological needs of the human being and have a significant role to play in human evolution.

These are the motives which awaken the individual and the community from the inertia, indolence and mechanical routine of physical nature to the dynamism of the vital nature or the life force; these are the motives which bring vitality, vigour and prosperity to the individual and the community. Similarly, Business and Politics are indispensable organs of the human society because they are a collective expression of some of the fundamental psychological needs of human beings. In any society of the past, present or future there will be business, politics and the social organism; there will also be luxury industries, which cater to the vital enjoyment of people.

For, we cannot eat knowledge or wear knowledge. We need commerce and industries to produce the utilities and luxuries for people. We need government to co-ordinate, regulate and direct the various organs of society. We need pragmatic knowledge and the people with the appropriate temperament, inclination, motives and the capacity for the efficient organisation of the material, economic, social and political life of the community.

But in a spiritual vision of human society the motives of wealth, power and enjoyment are not the highest motives and aims of life. These are the motives of the physical and vital nature in human beings. But a human organism is not merely a body, or emotions, senses and their desires which together constitute what is called the vital being in integral psychology. There is a higher nature in humans beyond his physical and vital nature which is made of his mental, moral, aesthetic and spiritual being. To rise into this higher mental and spiritual nature is perhaps the next step in human evolution. The central aim of this next, future step in human evolution will not be mere socio-economic development of the outer life of human beings; it will be the inner evolution of the individual and the collectivity or, in other words, the mental, moral, aesthetic, psychological and spiritual development of the human life.

The main motives of this higher stage in evolution will not be power and wealth; it will be the higher values and aims of life like truth, beauty, goodness, harmony, unity, freedom, equality, perfection and ultimately the Divine, which is the source of all values, ideals and perfections. The enjoyment that is pursued in this higher stage of evolution will not be solely or predominantly the sensuous or vital enjoyment but the aesthetic and spiritual enjoyment of the beauty and joy of life. The knowledge that is sought after will not be merely the materially pragmatic knowledge but the psychological, aesthetic and spiritual knowledge, which will lead to the concrete realisation of these higher motives, values and aims in the inner and outer life of human beings. For “knowledge” means, in the Indian spiritual conception, not information; nor is it practically useful knowledge which can be “leveraged” for “competitive advantage”. Knowledge means inner illumination which brings more consciousness or awareness; which leads to greater self-knowledge and a deeper world-knowledge and uplifts us to a higher level of consciousness; which liberates us from ego, desire, bondage and suffering and transforms us into a new Man. The knowledge-society of the future will seek this liberating higher knowledge.

And this is the next and the most logical step in the higher evolution of humanity. The present urgent need is to tackle the maladies of hunger, poverty and inequality which are related to the problem of Equality, which is a fundamental higher value of the human spirit. All the power and potentialities of IT has to be used extensively to awaken humanity to the need of Equality and Distributive Justice and disseminate the knowledge which will lead to a more and more equitable distribution of wealth, power, resources, knowledge and culture in the society.

However, we must also start thinking on the next step in the evolution of IT, which is perhaps to include in its purview not only outwardly utilizable knowledge but also inwardly pragmatic wisdom which will help people to become better human being and realize their spiritual destiny. The well-known science-fiction writer and the great prophet of science, Sir Arthur Clarke made the following interesting observation:

“When the world’s collective conscience finally succeeds in mobilizing sufficient political will and resources to banish the twin scourges of poverty and hunger, we will be left with another more insatiable but far less destructive substitute – the hunger for knowledge and wisdom. Let’s hope the world will never run out of that particular hunger.”