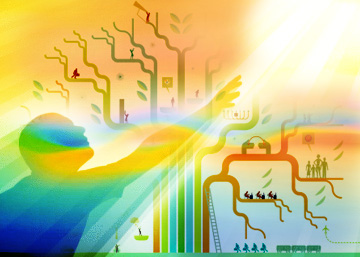 The previous article in this issue discusses briefly the emerging perspective on capitalism and its message for the future. The Indian social synthesis may perhaps provide a more holistic vision for restructuring capitalism. This article examines this ancient synthesis and its implications for reinventing capitalism.

The Indian way of thinking is based on the concept of Dharma which means in a simple language, laws of life and the values, ideas or principles or purpose derived from these laws. In this Indian perspective, Dharma is the basis for morality and also values, which means for deciding what is right and good in all matters. All that is in concord with Dharma lead to harmony, progress, well-being, enlightenment and therefore has to be consciously cultivated. All that is contrary to dharma leads to darkness and misery and therefore have to be shunned.

The Dimensions of Dharma

There are three dimensions to Dharma. First is the universal and eternal dimension, Sanatana Dharma, which is the highest laws, aims, values and ideals of human development, common to all humanity, like truth, beauty, goodness, unity, interdependence, harmony, progress, perfection. The second is the unique, specific or individual dimension, swadharma. Every individual and group and every human activity like politics or economics or social phenomena like capitalism or socialism is or has its own swadharma derived from its unique nature, temperament, purpose or historical evolution. Every individual, group or activity has to consciously progress towards the highest ideals of universal dharma, but each in its own way according to its unique swadharma. The third aspect of Dharma is the Yugadharma which means dharma of the age or in a wider view dharma of the contemporary world, like for example, globalism. The right course action, dharma, at any given situation or span of time has to be determined by a careful consideration of all the three dimensions of dharma.

In this dharmic vision, human society is only a framework for the mental, moral and spiritual growth of the individual and community. This higher growth or evolution is achieved by a progressive subordination, renunciation or self-giving of personal or corporate interests and goals to more and more universal and impersonal goals which belongs to the common good of all or derived from universal dharma. Each individual or community has to grow by following its own unique swadharma, in complementing harmony with the swadharma of others, contributing to the common good of all and ascending progressively towards the universal dharma.

The Four Organs of Society

According to Indian thought, human society is made of four organs: Culture, Economy, Polity and Work-force. The dharma of culture is to provide the ideas, ideals, values and the path of right living, dharma, which lead to the mental, moral, aesthetic and spiritual development of the individual and community. The dharma of polity is to enforce, establish and sustain dharma in society. The dharma of the economy is to create wealth and use it for the dharmic well-being and progress of the society. And the dharma of the work-force is to provide the physical energy and skill for the material realization of dharma in society. The Indian ideal of social development is a harmonious, mutually complementing and balanced growth of the four organs of the society organized around the ideals of dharma. Let us now reexamine capitalism in the light of this Indian synthesis and the new rethinking which we have discussed earlier.

The Message for Capitalism

The Indian thought recognized self-interest and enjoyment of wealth and power, Artha and Kama, as part of the legitimate four-fold motives or aims of life. But they are not regarded as the highest motives of life. Beyond Artha and Kama there are the motives and aim of dharma and moksha, which means mental, moral and spiritual development.

We must note here that Indian thought never rejected or condemned the seeking for wealth, power, enjoyment or even self-interest, like many other ascetic religions. Upto a certain stage in human development, these motives help the individual and community to raise from the tamasic inertia of the physical being to the dynamic throb of life and brings vital energy, vigour and prosperity to the economic, social and political life. But if they are pursued exclusively, as if they are the only motives and aims of life, then it leads to mental, moral and spiritual degenerations of the individual and community which ultimately leads to physical and vital decline. For a system which pursues exclusively Artha-Kama motives without any mental, moral or spiritual ideals is a closed system subject to the law of entropy, progressive disintegration. So for the higher evolution of an individual, community or a system, the Artha-kama motives of power, wealth, enjoyment and self-interest have to be subordinated to the mental, moral and spiritual motives and aim of life belonging to the dharma-moksha domains. So for the higher evolution of capitalism, it has to discover a higher motive beyond self-interest.

The new values emerging in management like corporate social responsibility, environmental sustainability or even customer service can provide such a dharmic elevation to capitalism. If serving the society and customer becomes the dominant aim of business it helps capitalism to raise beyond narrow corporate self-interest and greed to a higher dharmic level. Similarly, according to Indian thought, human nature is not entirely a mass of self-interested narrowness. In every human being there is a higher mental, moral and spiritual nature which seeks for higher values like truth, beauty and goodness and capable of selfless action.

This higher nature may be underdeveloped, weak, veiled or hidden behind the selfish and greedy lower nature made of the physical and vital ego, but it is there in every individual. As we have discussed earlier, the new scientific perspectives on human nature are moving closer to this Indian view. However according to Indian thought, this higher nature in human being can be consciously cultivated and brought forward in the individual or collectivity through appropriate education, inner and outer discipline and creating an external environment favourable to its growth. This is the path for the higher evolution of the individual or a group or any human activity or system of thought or practice.

Capitalism, in order to progress further, has to incorporate this deeper Indian insight on human nature and the new scientific perspective on the “Unselfish Gene” into its system of thought and practice. These new or higher motives emerging in business like for example CSR can be misused in a manipulative or self-serving manner. But this is unavoidable because there is a corrupting element in human nature which can twist or distort even the noblest urges. Secondly, self-interest is an obstinate and subtle thing which is difficult to eliminate. These dark spots in human consciousness can be eliminated entirely only in a spiritual consciousness beyond mind or under its direct and conscious influence in human nature. But in the course of our human evolution, we have to grow towards this spiritual aim by developing the nobler, sattwic mind which can subordinate its self-interest to the larger or common good, which is a dharmic movement. The new motives emerging in business represent this sattwic evolution.

Courtesy: VILAKSHAN, Journal of Xavier Institute of Management [partially reproduced with some modifications.]