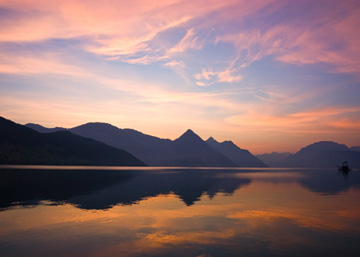 We are appalled by the massive destructions wrought by natural calamities like earthquakes and wonder why our Mother-Nature is so ruthless or indifferent to her children’s lives. But our vision is perhaps too narrow. We do not know the hidden purpose behind these violent convulsions of Nature. We try to impose the small scales of our tiny, little ego on the vast, expansive and universal strides of Nature. This article may help us to look at Nature’s movements with a deeper and wider vision.

Nature is a conscious force which knows what it wants, does it in its own way, knowing where it is going and its roads: it itself chooses them…

Nature has a plan, it has a conscious will, it is altogether a conscious-entity – it can’t be called a being, for it is not in the same proportion. When we speak of a being with our human consciousness, we immediately imagine a human being, perhaps a little larger or much larger, but still functioning always in the same way. That is why I don’t call it a being, but it is a conscious entity, a conscious will doing things consciously, deliberately, and having formidable forces at its disposal.

It is also said that the forces of Nature are blind and violent. But it is not at all that! It is man in his relative proportion with Nature who judges like that. Wait a little, let us take this example. When there is an earthquake, many islands are engulfed and millions of people killed. People say: “This Nature is monstrous.” From the human point of view this Nature is monstrous. What has it done? It has wrought a cataclysm. But just think how in jumping or running or doing something or other, you get a good knock and turn black and blue. It is the same thing for our cells as an earthquake; you destroy a huge number of cells! It is a question of proportion. For us, our little consciousness, ever so little, this appears something formidable but after all it is quite simply a contusion somewhere upon earth (not even in the universe). We are speaking only of the earth. What is it? Nothing at all, just a tiny little plaything in the universe. If we speak of this universe, then the disappearance of the worlds – these are just contusions. It is nothing.

One must, if one can, widen one’s consciousness.

I knew somebody who wanted to widen his consciousness; he said he had found a way, it was to lie flat on his back at night, out-of-doors, and look at the stars and try to identify himself with them, and go away deep, into an immense world and so lose completely all sense of proportion, of the order of the earth and all its little things, and become vast as the sky – you couldn’t say as vast as the universe, for we see only a tiny bit of it, but vast as the sky with all the stars. And so, you know, the little impurities fall off for the time being, and one understands things on a very vast scale. It is a good exercise.

Both are good exercises. Try to compare them, you’ll see: you are walking on a street, there is an army of ants going from one nest to another (you do not look down, you are talking with someone); very negligently you put one foot and then the other, and you crush hundreds of ants without even being aware of it. If you were an ant, you would say: “What a wicked and beastly force!” You are just walking. You have not paid attention. But suppose there are beings of this kind for whom we are just tiny little ants. They put one foot and then the other and millions of people are killed. They are not even aware of it! They have not done it on purpose. They were just walking along, that’s all. The only difference you could make (and yet I am not quite sure), the only difference between the ant and man is that man is able to think of what happens to him, and perhaps the ant is not conscious of it? I don’t know at all. I don’t guarantee it.