Fourth Dimension Inc. > Sustainability > Our Planet and Our Environment 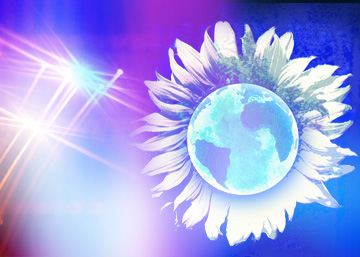 I died as a mineral and became a plant,
I died as plant and rose to animal,
I died as animal and I was Man.
Why should I fear? When was I less by dying?
Yet once more I shall die as Man, to soar
With angels blest; but even from angelhood
I must pass on: all except God doth perish.
When I have sacrificed my angel-soul,
I shall become what no mind e’er conceived.
To Him we shall return.

What is the purpose behind the creation of our planet? This is not a philosophical question but has a living relevance to the future of modern environmental movement.

Our planetary destiny; from matter to mind; towards a more perfect consciousness; future of environmentalism.

The destiny of our planet can be examined at various angles or levels: scientific, philosophical, spiritual and practical. According to modern science, in our solar system, life exists only on earth. There may be life in other earths and other planets in the universe, in other solar system. But in our solar system life is there only on earth. And scientists also tell us that if the carbon atom, which is the basis of life in our planet, has one electron less in its orbit, there won’t be any life in our planet. This means the entire earthly creation is so minutely planned to bear life. This also indicates, there must be some great purpose behind the world we live.

But what is this great purpose behind our planet and life in it? The key to the answer lies in another concept of Science: Evolution. Most of us might have studied the Darwin’s theory of evolution and how life appeared in our planet. We will not enter into the scientific details but will explore it through imagination. For, as Albert Einstein said, “Imagination is more important than knowledge.”

From Matter to Mind

So imagine you are some sort of an eternal Witness to the history of earth. At the beginning there was only the world of Matter, the sand and the stone and the volcano and the sea on the land below and the sun and the moon and the stars in the sky above. If you watch and observe patiently for many more thousands of years, you will see something new emerging from the bare stone, something green, more living than brute matter: leaves, grass, bush, meadows, plants, trees, flowers. What has happened? The world has progressed and acquired a new potentiality called life? What is this Life? What is the main difference between Matter and Life?

Unlike the stone which is closed upon itself, the life in plants is open and responsive to the outer environment. We might have studied photosynthesis in our science course, how the plant absorbs sunlight, take carbon from the atmosphere, emit oxygen and make the nutrients needed for its growth. This is life or to be more precise, plant-life.

The next important question is from where this life, this new potentiality has come, like an impossible green living miracle from the bare “dump” stone? Here there is a divergence of opinion between modern science and ancient Indian philosophy. According to Science, life is the result of a chace combination of atoms and molecules. When the atomic or molecular structure of matter acquires a certain complexity, life emerges. But from where? Science has no clear answers to this question where? But according to Indian philosophy, life already exists in Matter as an unmanifest potential. When the atomic structure of Matter acquires a certain complexity, it manifests and creates the living matter of the plant. We must note here this Indian idea is not entirely unscientific. An eminent Indian scientist, Jagdish Chandra Bose has proved by rigorous experiment that the potentiality of life exists in Matter in a rudimentary form.

We are now in a better position to understand the meaning of Evolution and a first indication of an answer to the questions we are discussing. The essence of evolution is growth, progress. And the essence of this evolutionary growth or progress is the emergence or manifestation of a potential which has remained hitherto dormant, involved or unmanifest. Life which remained involved in the stone has evolved and become the plant.

What was the next stage in this evolutionary progress of Matter? If you continue witnessing the journey of evolution for some more thousands of years, you will see appearing in this unseeing world of stone and plant, something moving with curious eyes. Our many-legged, or legless or winged brothers; reptiles, birds, animals, big and small, from the tiny insect to the huge dinosaurs; crawling, hopping, flying, running.

Thus after the plant came the animal with a higher potentiality than the plant. While the plant can only respond to the environment, the animal can “sense” the world. They have a sensational mind which can see, touch, smell and hear and quite possibly feel and have similar emotions like us.

And again, if you still continue witnessing this aeonic spectacle of evolution one day you will see an animal, perhaps a monkey or a gorilla, stands erect, looks up in to the sky, and becomes, Man. According to historians, Neanderthal is one of the earliest and the most primitive type of man. And the Neanderthal who is probably a hunter, has progressed fast to become the agriculturalist, trader, warrior, king, industrialist, engineer, doctor, thinker, writer, poet, artist, philosopher, sage; producing, building, creating, inventing, thinking and seeking for the invisible realities beyond the senses. So after the animal came we the humans, with a thinking self-conscious mind which can not only sense things but can think and asks questions like the one we are discussing, “why the world exist” which the animal can never ask.

Towards a More Perfect Consciousness

Thus we can see that the world is not something stagnant but something evolving, progressive; it has progressed from Matter to Life and from Life to Mind. And from Mind to – where? Perhaps towards something which has a greater potentiality than the mind, some thing much more perfect, beautiful, harmonious and divine than our human mind, another great leap forward in consciousness towards a greater consciousness beyond the human mind?

We can say the world exists because it is a grand divine experiment in evolution, progressing towards a great divine goal. There is life on earth because it is a stage in evolution. We human being, with our thinking mind, exist, because we and our mind are also a stage in evolution. But our human mind and human life are still very imperfect. This we can see concretely when we study and observe carefully and attentively the world created by our human mind, which is around us and also the inner world of our thoughts and feelings. When we read the newspaper or see the News in TV we will have some glimpse of the world made by our human mind; it is full of war, conflict, poverty, violence, exploitation, environmental degeneration. And the world outside is a reflection of the world within us, because as a great modern seer has said, “We are the world.”

The world around, not the world created by Nature which is beautiful, but the world created by us is so imperfect, full of jarring conflict and ugliness because our mind is imperfect full of selfishness, and negative feelings like anger, jealousy and vengefulness. We, human beings, individually and collectively, as a race, have to raise beyond our imperfect human mind to a greater and more perfect consciousness beyond mind, which is the consciousness of the divinity within us, which is beautiful, harmonious, loving, and blissful. When we are able to reach this higher consciousness beyond mind, live, act and create from this divine consciousness, we will build a world which is free from war and conflict and poverty and which is true, beautiful, harmonious and perfect. This is the next step in human and planetary evolution. This is the reason why the world exists and life appeared on earth.

The Future of Environmentalism

This evolutionary growth is not an idealistic luxury but an evolutionary necessity. Those individuals and communities who are able to make this evolutionary leap will be the leaders of the future. There is much talk about “Saving Earth.” We humans cannot save Nature. In comparison to the vastness, might and wisdom of Nature, we humans are like ants crawling in the dust. We have to save ourselves by attuning our self and life with the laws of Nature-physical, psychological, evolutionary and spiritual. If we are unable or unwilling to do it clinging to our ego and greed, then we will perish as a civilisation, ending in a nuclear or ecological holocaust like some of the legendary civilizations of the past. But Nature will move on with her evolutionary journey with alternative possibilities.

So the present environmental movement has to progress further towards a wider understanding of Nature and the concept of Sustainable Development based on the higher purpose of planetary evolution.

In modern environmental thought Nature is physical and biological. This raises some important questions. If Man is part of Nature, in what sense? For Man is not only a physical being but has a consciousness. What is the source of our consciousness? Is it part of physical nature and a mere epiphenomenon of material evolution? But why modern ecology, which has given a higher orientation to modern thought and moving towards a more and more holistic approach to development accept such a grossly materialistic view of consciousness? Will it not be more logical as well as holistic to conceive consciousness as inherent in Nature and our consciousness as a part of the universal consciousness of Nature or Spirit or God, or in other words, part of the higher dimensions of Nature beyond the physical?

In fact many eminent scientists are now dissatisfied with the materialistic conceptions of the traditional scientific view and veering towards the spiritual conception of eastern thought. For example John Eccles, the Nobel Laureate in Medicine and Physiology uses strong words when he says:

‘I maintain that the human mystery is incredibly demeaned by scientific reductionism with its claim in promissory materialism to account for all the spiritual worlds in terms of patterns of neuronal activity. This belief must be classed as superstition… we have to recognize that we are spiritual beings with souls existing in spiritual worlds with bodies and brains existing in a material world’.

‘Understanding the universe, I think is somewhat parallel to our understanding of our relation with the Creator. In this search for truth, it will be certainly beneficial if scientists can incorporate the spiritual principles in their scientific works.’.