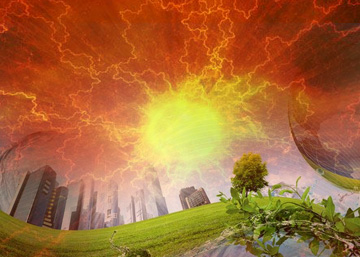 A brief summary of other alternatives like nuclear fusion.

A promising source of future energy is nuclear fusion which aims at replicating the process by which Sun generated energy in a nuclear reactor. There are two types of fusion technologies, “Hot” and “Cold”. The hot fusion method tries to bring about the fusion of hydrogen atoms under high temperatures. The hopes of cold fusion research is based on some latest discoveries in experimental physics, which indicate that in some atoms like lithium, under certain conditions, nuclear fusion reactions can be initiated even under much lower temperatures.

However nuclear fusion, after some initial hopes and nearly forty years of research has not made much progress. One of the reasons could be lack of funding and support from the Government and private sector. At present nuclear energy industry is entirely based on the fission technology. Most of the funding on research and development work in the nuclear energy goes to improving the efficiency and productivity of fission technology and making it more safe and clean through fast-breeder or thorium reactor technology or better nuclear waste disposal or recycling strategies.

In the short-term, considering the critical energy situation of our planet, nuclear fission technology and its new and upgraded versions are perhaps necessary. But in the long-term, policy makers, planner and administrators in the field of science, energy and environment have to think-out how to accelerate research and development in nuclear fusion because ultimately solar power through satellites and nuclear fusion hold the greatest hope for a safe, clean and virtually inexhaustible source of energy for the future. This means our ultimate aim in the energy front is to slowly phase out the unecological fission technology and replace it with the solar-based energies. Interestingly, physicist Otto R. Fisch, who is one of the inventors of nuclear fission technology said:

“Uranium burning stations, plutonium breeders… will always remain dangerous to human beings. I look forward to a world where men no longer depend on fossil fuels – not on coal, wood, oil – nor uranium or hydrogen. It may take a long time, but man must break the bad habit of using whatever happens to be lying around to meet his growing energy needs. In the end, he will be compelled to stop his wandering into such thickets of danger and to turn back to the source of all energy. He must turn to the Sun.”

However until we reach this goal of sourcing all energy from the Sun, we have to a certain extent use “whatever happens to be lying around” us, but with an increasing reliance on greener or safer sources of energy, keeping the ultimate goal of a solar-based energy constantly in our view. Meanwhile, the best alternative in between is to have a judicious combination of a large-scale or centralized power made of conventional thermal or nuclear energy linked synergically with a large number of local, decentralized and small-scale renewable energy sources like solar photovoltaic cells, geo-thermal, biomass, tidal or micro hydroelectric. Even when the solar or nuclear fusion technology becomes commercially viable on a large scale this combination of centralized and decentralized source of renewable energies seem to be the ideal system of energy management.

To make all these promising technologies yield a commercially competitive alternative to conventional energy requires perhaps a focused, well-planned and accelerated research and development project-international, inter-institutional and interdisciplinary coordinated by a single agency, on the lines of moon-landing or genome project.