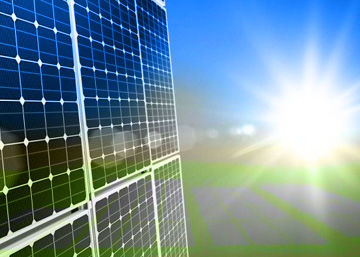 Prospects and possibilities of tapping the only source of inexhaustible energy.

Among the green energy technologies, one great hope is Solar Power. The photo-voltaic cell technology, which captures sun-light and converts it to electricity, seems to be at the threshold of a technological and commercial break-through. According to some industry experts, at present solar photo-voltaic cell is very close to becoming commercially competitive with conventional fuels. For example, K. Subramanyam, CEO of Tata BP Solar India Ltd states: “its just a matter of time for solar energy to be powering our daily lives” because, from a long-term perspective based on “total life-cycle”, cost of solar energy is cheaper than conventional fuels. Some Scientists in the US believe that with sufficient investment, the United States could meet as much as 69% of its electricity demand and 35% of all its energy demand, including transport, by 2020 through solar power, with prices comparable with fossil fuels.

There are three promising technologies which can bring about a radical and large-scale improvement in the environmental and energy situation of our planet. They are, in the field of power generation, solar energy harnessed though communication satellites and nuclear fusion. In the transportation sector, hydrogen fuel cell technology. The common factor behind the three technologies are that they are solar based. The difference between fission and fusion technology is that while the former generates energy by splitting the nucleus of an atom, the later tries to tap the energy generated by the fusion of hydrogen atoms, which is the process by which sun generates energy. Hydrogen fuel cell technology uses solar power to generate hydrogen and use hydrogen to power fuel cells, which combines hydrogen and oxygen to produce energy and water!

Some scientists believe solar power through satellites hold a great promise for the future. Martin A. Hogger and Heth D. Potter, write in their article in Technology Review: “Satellites can capture vast amount of solar energy and transfer it to earth on uninterrupted beams of microwaves. Thanks to fleets of low-orbiting satellites to be launched on the coming decade, solar power may be the energy source of the 20th century”. Similarly many automobile and environmental experts believe that hydrogen-powered vehicle is likely to be the locomotive of the future and the green alternative to the petrol or diesel engine. The advantages of hydrogen fuel are, first, it is free from harmful emissions; second it is silent and has no moving parts; third its efficiency is high, twice that of the petrol engine; fourth, the energy it produces is electrical and therefore it fits in easily with electric motors. Hydrogen-powered car is in the research and development agenda of almost all the big auto-majors of the world like Ford, Chrysler and Benz. And the technology has progressed from the laboratory and the drawing board to workable prototypes and some commercial vehicles. Amory Livon, director of the Rocky Mountain Institute, a leading green think tank which has developed a prototype of the Hydrogen-fuelled car, says regarding this new technology:

“Very exciting things are happening in the car business. It’s just like the era when personal computers started to replace typewriters and it took a while to realise what was going on. This is going to be the biggest shift in industrial sector after the chip.”