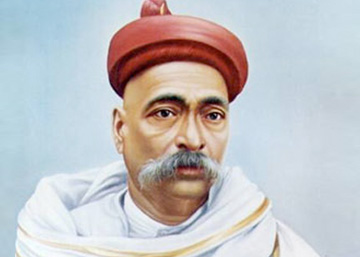 In this article, which is a tribute to a great nation builder, Sri Aurobindo brings out vividly some of the dimensions and qualities of effective political leadership.

The nation builder; who can see the big picture; anchored on the roots of his nation; a democratic politician who can awaken the masses; a pragmatic idealist; a firm will and a sincere heart.

A Great mind, a great will, a great and pre-eminent leader of men has passed away from the field of his achievement and labour. To the mind of his country Lokamanya Tilak was much more, for he had become to it a considerable part of itself, the embodiment of its past effort, and the head of its present will and struggle for a free and greater life. His achievement and personality have put him amidst the first rank of historic and significant figures. He was one who built much rapidly out of little beginnings, a creator of great things out of an unworked material. The creations he left behind him were a new and strong and self-reliant national spirit, the reawakened political mind and life of a people, a will to freedom and action, a great national purpose. He brought to his work extraordinary qualities, a calm, silent, unflinching courage, an unwavering purpose, a flexible mind, a forward-casting vision of possibilities, an eye for the occasion, a sense of actuality, a fine capacity of democratic leadership, a diplomacy that never lost sight of its aim and pressed towards it even in the most pliant turns of its movement, and guiding all, a single-minded patriotism that cared for power and influence only as a means of service to the Motherland and a lever for the work of her liberation. He sacrificed much for her and suffered for her repeatedly and made no ostentation of his suffering and sacrifice. His life was a constant offering at her altar and his death has come in the midst of an unceasing service and labour.

Who Can See the Big Picture

There are always two classes of political mind: one is preoccupied with details for their own sake, revels in the petty points of the moment and puts away into the background the great principles and the great necessities, the other sees rather these first and always and details only in relation to them.

The one type moves in a routine circle which may or may not have an issue; it cannot see the forest for the trees and it is only by an accident that it stumbles, if at all, on the way out. The other type takes a mountain-top view of the goal and all the directions and keeps that in its mental compass through all the deflections, retardations and tortuosities which the character of the intervening country may compel it to accept; but these it abridges as much as possible. The former class arrogate the name of statesman in their own day; it is to the latter that posterity concedes it and sees in them the true leaders of great movements. Mr. Tilak, like all men of pre-eminent political genius, belongs to this second and greater order of mind.

Anchored on the Roots of His Nation

Mr. Tilak was the first political leader to break through the routine of its somewhat academical methods, to bridge the gulf between the present and the past and to restore continuity to the political life of the nation. He developed a language and a spirit and he used methods which Indianised the movement and brought into it the masses. To his work of this period we owe that really living, strong and spontaneously organised movement in Maharashtra, which has shown its energy and sincerity in more than one crisis and struggle. This divination of the mind and spirit of his people and its needs and this power to seize on the right way to call it forth prove strikingly the political genius of Mr. Tilak; they made him the one man predestined to lead them in this trying and difficult period when all has to be discovered and all has to be reconstructed. What was done then by Mr. Tilak in Maharashtra, has been initiated for all India by the Swadeshi movement. To bring in the mass of the people, to found the greatness of the future on the greatness of the past, to infuse Indian politics with Indian religious fervour and spirituality are the indispensable conditions for a great and powerful political awakening in India. Others, writers, thinkers, spiritual leaders, had seen this truth. Mr. Tilak was the first to bring it into the actual field of practical politics. This second period of his labour for his country culminated in a longer and harsher imprisonment which was, as it were, the second seal of the divine hand upon his work; for there can be no diviner seal than suffering for a cause.

A Democratic Politician Who can Awaken the Masses

He is entirely a democratic politician, of a type not very common among our leaders, one who can both awaken the spirit of the mass and respond to their spirit, able to lead them, but also able to see where he must follow the lead of their predominant sense and will and feelings. He moves among his followers as one of them in a perfect equality, simple and familiar in his dealings with them by the very force of his temperament and character, open, plain and direct and, though capable of great reserve in his speech, yet, wherever necessary, admitting them into his plans and ideas as one taking counsel of them, taking their sense even while enforcing as much as possible his own view of policy and action with all the great strength of quiet will at his command. He has that closeness of spirit to the mass of men, that unpretentious openness of intercourse with them, that faculty of plain and direct speech which interprets their feelings and shows them how to think out what they feel, which are pre-eminently the democratic qualities. For this reason he has always been able to unite all classes of men behind him, to be the leader not only of the educated, but of the people, the merchant, the trader, the villager, the peasant.

Moreover, though he has ideals, he is not an idealist by character. Once the ideal fixed, all the rest is for him practical work, the facing of hard facts, though also the overcoming of them when they stand in the way of the goal, the use of strong and effective means with the utmost care and prudence consistent with the primary need of as rapid an effectivity as will and earnest action can bring about. Though he can be obstinate and iron-willed when his mind is made up as to the necessity of a course of action or the indispensable recognition of a principle, he is always ready for a compromise which will allow of getting real work done, and will take willingly half a loaf rather than no bread, though always with a full intention of getting the whole loaf in good time. But he will not accept chaff or plaster in place of good bread.

Yet also, because he is a practical politician and a man of action, he has always, so long as the essentials were safe, been ready to admit any change in name or form or any modification of programme or action dictated by the necessities of the time.

The leader of men in war or politics will always distrust petty and episodical gains which, while giving false hopes, are merely nominal and put off or even endanger the real issue, but will always seize on any advantage which brings decisive victory definitely nearer. It is only the pure idealist, – but let us remember that he too has his great and indispensable uses, – who insists always on either all or nothing. Not revolutionary methods or revolutionary idealism, but the clear sight and the direct propaganda and action of the patriotic political leader insisting on the one thing needful and the straight way to drive at it, have been the sense of Mr. Tilak’s political career.

A firm Will and a Sincere Heart

Two facts of his life and character have to be insisted on as of special importance to the country because they give a great example of two things in which its political life was long deficient and is even now not sufficient. First, the inflexible will of the patriot and man of sincere heart and thorough action which has been the very grain of his character: for aspirations, emotion, enthusiasm are nothing without this; will alone creates and prevails. And wish and will are not the same thing, but divided by a great gulf: the one, which is all most of us get to, is a puny, tepid and inefficient thing and, even when most enthusiastic, easily discouraged and turned from its object; the other can be a giant to accomplish and endure. Secondly, the readiness to sacrifice and face suffering, not needlessly or with a useless bravado, but with a firm courage when it comes, to bear it and to outlive, returning to work with one’s scars as if nothing had happened. No prominent man in India has suffered more for his country; none has taken his sacrifices and sufferings more quietly and as a matter of course.