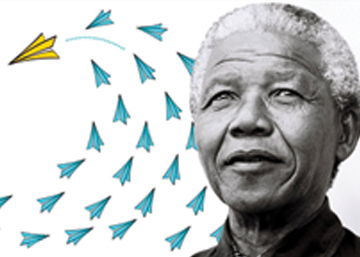 (This article presents a brief leadership review of a great leader who liberated South Africa from apartheid).

To those who observed him closely, Nelson Mandela always carried himself as one who was born to lead. As his former cellmate and long-time friend, Ahmed Kathrada, said: “He was born into a royal house and there was always that sense about him, of someone who knew the meaning of leadership.”

Helen Suzman, the lone parliamentary voice of opposition to the nationalist government, went to Robben Island to check if the prisoners were being treated fairly. She wrote:

He had an amazing way of communicating with people, particularly the young. He mesmerised them. It was not a politician’s way: unlike many politicians he had warmth, real warmth.

When I arrived I was taken to the single cells where the political prisoners were kept. Eddie Daniels’ cell was the closest to the door. When I went to him, he said: “We know who you are. Go right to the end and you will find our leader, Nelson Mandela.”

Even in these conditions his leadership was acknowledged. My memory of that first meeting is that he was a man who exuded a lot of authority. Within a few minutes of discussion, given his understanding of the situation in the country, I was convinced that he would be an essential component of any negotiation process about the country’s future. I of course did not realise that it would take so long to get there.

Mandela was very courageous in that meeting. The head of the prison was with me and yet he was not cowed down.…

I continued to see Mandela at Robben Island and later when he was moved to Pollsmoor and Victor Verster prisons. Seeing and chatting with him made me stronger in certain ways — I made speeches every year in parliament calling for the release of all political prisoners. …

I do not think that our country would have become what it is without the magnanimity that he and FW de Klerk showed in the late 1980s and early 1990s. That is their greatest achievement.

Mandela once said: “When there is danger, a good leader takes the front line; but when there is celebration, a good leader stays in the back of the room.” He added: “Sometimes a leader has to criticise those with whom he works — it cannot be avoided. I like a leader who can, while pointing out a mistake, bring up the good things the other person has done. If you do that, then the person sees that you have a complete picture of him. There is nobody more dangerous than one who has been humiliated, even when you humiliate him rightly.”

British Foreign Secretary, Douglas Hurd, considered Mandela’s courtesies as one of his leadership qualities: “Mandela’s courtesy in small things derived more widely from his underlying belief that the way forward for South Africa lay in discussion and reconciliation.”

One of the great qualities of leadership is humility. In an interview Mandela was asked, “You once told me that humility is one of the greatest qualities a leader can have. Did you come out of prison a more humble man?” He replied: “If you are humble, you are no threat to anybody. Some behave in a way that dominates others. That’s a mistake. If you want the cooperation of humans around you, you must make them feel they are important — and you do that by being genuine and humble. You know that other people have qualities that may be better than your own. Let them express them.”

Thomas Friedman in an article in The New York Times speaks of Dov Seidman, author of the book How, who advises CEOs on governance. Friedman writes: “’What is so inspiring about Mandela,’ explained Seidman, ‘is that he did not make the moment of South Africa’s transition about himself. It was not about his being in jail for 27 years. It was not about his need for retribution.’ It was about seizing a really big moment, to go from racism to pluralism, without stopping for revenge. ‘Mandela did not make himself the hope,’ added Seidman. ‘He saw his leadership challenge as inspiring hope in others, so they would do the hard work of reconciliation. It was in that sense that he accomplished big things by making himself smaller than the moment. ’‘Through his uncommon humility and his willingness to trust his people with the truth,’ explained Seidman, ‘Mandela created a hopeful space where enough South Africans trusted each other enough so they could unite and do the hard work of transition together.’‘ Finally, said Seidman, ‘Mandela did big things by making himself small.’

Mandela also said: “I learned to have the patience to listen when people put forward their views; even if I think those views are wrong. You can’t reach a just decision in a dispute unless you listen to both sides, ask questions, and view the evidence placed before you. If you don’t allow people to contribute, to offer their point of view, or to criticise what has been put before them, then they can never like you. And you can never build that instrument of collective leadership.”

ANC stalwart, Mac Maharaj, writes of Mandela: “One of his strengths was his ability to look at himself; this was something he deepened and broadened during 27 years in prison. During out discussions in jail, he had the willingness to say ‘maybe we were wrong,’ which didn’t play well in many quarters.” Maharaj also wrote, “His strength is not simply to change his views but also to acknowledge his adversary when he did make the shift.”

My first meeting with Nelson Mandela was on the evening of 13th December 1989 … I was immediately struck by his charm and his leadership qualities.

We discussed the ANC demand for majority rule on the one hand and the need for structural guarantees for minorities on the other. At the end of our brief meeting I concluded he was a man with whom I would be able to do business.

He had a great sense of dignity. He was courteous and self-confident. Later in my relationship with him I learned that he could also be remorseless and harsh — but then we were, after all, political opponents. He had the leadership of a natural aristocrat….

Mandela hauled the young ones into a new South Africa. Along the way, particularly in the 1990s, he was called everything from soft to a stooge of the regime. But today we know the necessity of his actions.

Mandela managed to drag the young and angry along with him because he had once been a very angry young man himself. In the late 1940s and early 50s he had been one of the powerful young ANC leaders who installed a radical new leadership and programme of action.

How do I remember Nelson Mandela? In George Orwell’s famous story a young British policeman stationed in Burma walks towards an elephant that has just killed a villager. There are 2,000 Burmese following him. He is the only one with a gun. They all want him to kill the elephant. He knows that it would be wrong to do so because the elephant no longer poses a threat to anyone. But he is scared of looking a fool — and regarded as weak — by the villagers. So he shoots the elephant.

When Mandela came out of prison there were millions of us behind him. We all urged him at the top of our voices to act radical, to shoot the apartheid elephant and cause a conflagration. He did not.

He is the greatest, most courageous and honest leader we ever had. He gave us — the so-called “lost generation” of South Africa — a future. He saved us.

Indeed, one of Mandela’s greatest gifts to the nation and the world was the lesson of forgiveness and reconciliation. Mr. de Klerk, who released Mandela from prison in 1990 and then negotiated the end of apartheid, called Mandela a “humane” and “compassionate” man who was able to understand the fears of South Africa’s white minority in the transition to democracy. “He was a great unifier and a very, very special man in this regard beyond everything else he did. This emphasis on reconciliation was his biggest legacy.”…

When Mandela passed away, acclaimed American poet and author Maya Angelou was asked by the U.S. State Department to write a tribute poem to him on behalf of the American people. Angelou’s interview with CBS about Mandela and the poem is very touching. She mentioned that she was married to a South African freedom fighter, a member of the PAC, who was an arch rival of the ANC in the South African struggle against apartheid. She said: “Mr. Mandela came to Egypt where I was living. And I’ve been so used to these rivals arguing and shouting in the living room and shouting in the street against each other. … When Mr. Mandela came here he never had a cross word to say to anyone. I was amazed. I had never seen a South African that kind. He had a compliment to give to everybody, including my housekeeper and the doorman, it was amazing. A gentle giant he was.” When asked “What did Nelson Mandela mean to you?” she replied, “I know that, with the attitudes and anger in South Africa after apartheid, had there been no Mandela we would see blood running in the streets because apartheid was so brutal and the people were so angry, the black people were so angry and white people felt so guilty, until Nelson Mandela released from prison came out smiling and holding hands with whites and holding white babies and saying this is a time for friendship, this is about South Africa. … That is the great gift of Nelson Mandela.” She adds, “There is something greater than you, and there is a good thing to do, you can stand on the good foot, you can say the kind things, you can be generous, you can, and he showed us that. He also showed us how liberating it is to forgive.” When asked, “If you were to pass on to the world one thing of Nelson Mandela, what would it be.” She replied, “I would talk about his kindness, I think you cannot really forgive if you are not really kind. And so you forgive a person or persons or systems, you forgive them and then you don’t have to drag them around every day and all day and all night long. It’s a gift to yourself to forgive and I would say Nelson Mandela’s gift to the world was his ability to forgive.”

One is reminded here of Mother’s phrase: “True greatness, true superiority lies in kindness and goodwill.”

We conclude the article with a quote from Nelson Mandela, which can aptly be applied to him: “What counts in life is not the mere fact that we have lived. It is what difference we have made to the lives of others that will determine the significance of the life we lead.”

(Excerpts from his article in Mother India of March 2019)