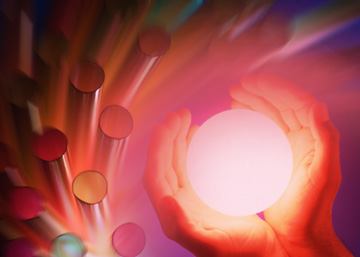 There is a consciousness in material things which responds to human care and attention. A positive attitude to material objects, treating them as if they are living and conscious things invokes a corresponding response from them and attracts material wealth.

Consciousness in matter; caring for things.

As we progress and awaken to the soul in us and things, we shall realise that there is a consciousness also in the plant, in the metal, in the atom, in electricity, in everything that belongs to physical nature; we shall find even that it is not really in all respects a lower or more limited mode than the mental, on the contrary it is in many “inanimate” forms more intense, rapid, poignant, though less evolved towards the surface.

Most people say there is “consciousness” when they begin to think – when one doesn’t think one is not conscious. But plants are perfectly conscious and yet they do not think. They have very precise sensations which are the expression of a consciousness, but they do not think. Animals begin to think and their reactions are much more complex. But both plants and animals are conscious. One can be conscious of a sensation without having the least thought.

Does the range of what we can call consciousness cease with the plant, with that in which we recognise the existence of a sub-animal life? The development of recent research and thought seems to point to a sort of obscure beginning of life and perhaps a sort of inert or suppressed consciousness in the metal and in the earth and in other “inanimate” forms, or at least the first stuff of what becomes consciousness in us may be there.

There is a consciousness in each physical thing with which one can communicate. Everything has an individuality of a certain kind, houses, cars, furniture etc. The ancient peoples knew that and so they saw a spirit or “genius” in every physical thing.

The rough handling and careless breaking or waste and misuse of physical things is a denial of the yogic consciousness and a great hindrance to the bringing down of the Divine Truth to the material plane.

There is a kind of respect for the object one has, which must make one treat it with much consideration and try to preserve it as long as possible, not because one is attached to it and desires it, but because an object is something respectable which has sometimes cost a lot of effort and labour in the producing and so must as a result be considered with the respect due to the work and effort put into it.

Orderly harmony and organisation in physical things is a necessary part of efficiency and perfection and makes the instrument fit for whatever work is given to it.

In the most physical things you have to fix a programme in order to deal with them, otherwise all becomes a sea of confusion and haphazard. Fixed rules have also to be made for the management of material things so long as people are not sufficiently developed to deal with them in the right way without rules.

Wanton waste, careless spoiling of physical things in an incredibly short time, loose disorder, misuse of service and materials due either to vital grasping or to tamasic inertia are baneful to prosperity and tend to drive away or discourage the Wealth-Power. These things have long been rampant in the society and, if that continues, an increase in our means might well mean a proportionate increase in the wastage and disorder and neutralise the material advantage. This must be remedied if there is to be any sound progress.

Asceticism for its own sake is not the ideal of this yoga, but self-control in the vital and right in the material are a very important part of it – and even an ascetic discipline is better for our purpose than a loose absence of true control. Mastery of the material does not mean having plenty and profusely throwing it out or spoiling it as fast as it comes or faster. Mastery implies in it the right and careful utilisation of things and also a self-control in their use.