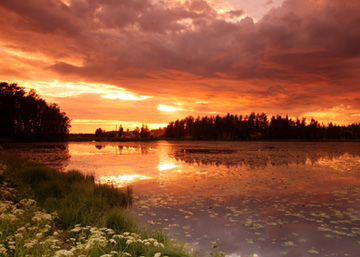 How to observe Nature with a deep and delicate inner sensitivity? A modern seer shows us the way. The look of the seer is minute and nothing escapes his observing eye but at the same time it proceeds further beyond the outer forms into the silence behind Nature or moves towards an inner identity with the intense life-energy which animates her forms.

I wonder if you ever notice the sunrise with all their astonishing colours. I wonder if you notice the light reflected on the water, the fishermen in their boats, the vultures wheeling high in the sky, the smaller birds among the trees and the early morning sun shining on a single leaf. Do you see these things, you know seeing is one of the extraordinary things.

There were a few clouds gathering around the sun; they were far down on the horizon and were afire. The palm trees were dark against the flaming sky; they stood in golden-green rice fields stretching far into the horizon. There was one all by itself, in a yellowing green of rice; it was not alone, though it looked rather forlorn and far away. A gentle breeze from the sea was blowing and a few clouds were chasing each other, faster than the breeze. The flames were dying and the moon strengthened the shadows. Everywhere there were shadows, quietly whispering to each other. The moon was just overhead and across the road the shadows deep and deceptive. A water snake might be crossing the road; quietly slithering across, pursuing a frog; there was water in the rice fields and frogs were croaking, almost rhythmically; in the long stretch of water beside the road, with their heads up, out of the water, they were chasing each other; they would go under and come up to disappear again. The water was bright silver, sparkling and warm to the touch and full of mysterious noises. Bullock carts went by, carrying firewood to the town; a cycle bell rang, a lorry with bright glaring lights screeched for room and the shadows remained motionless. It was a beautiful evening and there on that road so close to town, there was deep silence and not a sound disturbed it, not even the moon and the lorry.

The earth was the colour of the sky; the hills, the green, ripening rice fields, the trees and the dry, sandy riverbed were the colour of the sky; every rock on the hills, the big boulders, were the clouds and they were the rocks. Heaven was the earth and the earth heaven; the setting sun had transformed everything. The sky was blazing fire, bursting in every streak of cloud, in every stone, in every blade of grass, in every grain of sand. The sky was ablaze with green, purple, violet, indigo, with the fury of flame. Over that hill it was a vast sweep of purple and gold; over the southern hills a burning delicate green and fading blues; to the east there was a counter sunset as splendid in cardinal red and burnt ochre, magenta and fading violet. The counter sunset was exploding in splendour as in the west; a few clouds had gathered themselves around the setting sun and they were pure, smokeless fire which would never die. The vastness of this fire and its intensity penetrated everything and entered the earth. The earth was the heavens and the heavens the earth. And everything was alive and bursting with colour and colour was god, not the god of man. The hills became transparent, every rock and boulder was without weight, floating in colour and the distant hills were blue, the blue of all the seas and the sky of every clime. The ripening rice fields were intense pink and green, a stretch of immediate attention. And the road that crossed the valley was purple and white, so alive that it was one of the rays that raced across the sky. You were of that light, burning, furious, exploding, without shadow, without root and word. And as the sun went further down, every colour became more violent, more intense and you were completely lost, past all recalling. It was an evening that had no memory.