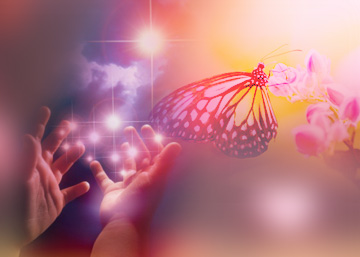 The true love is not the popular sentiment celebrated in the Valentine day. But we should not condemn or suppress these feeling in a rude, ascetic or kill-joy spirit. If we are able to “go through” and find the deeper source of these sentiments, we can transform them into pure love. In this article, Mother describes the path and discipline for discovering true love.

Q. It is said that to become conscious of divine Love all other love has to be abandoned. What is the best way of rejecting the other love which clings so obstinately (laughter) and does not easily leave us?

To go through it. Ah!

To go through, to see what is behind it, not to stop at the appearance, not to be satisfied with the outer form, to look for the principle which is behind this love, and not be content until one has found the origin of the feeling in oneself. Then the outer form will crumble of itself and you will be in contact with the divine Love which is behind all things.

That is the best way.

To want to get rid of the one in order to find the other is very difficult. It is almost impossible. For human nature is so limited, so full of contradictions and so exclusive in its movements that if one wants to reject love in its lower form, that is to say, human love as human beings experience it, if one makes an inner effort to reject it, one usually rejects the entire capacity of feeling love and becomes like a stone. And then sometimes one has to wait for years or centuries before there is a reawakening in oneself of the capacity to receive and manifest love.

Therefore, the best way when love comes, in whatever form it may be, is to try and pierce through its outer appearance and find the divine principle which is behind and which gives it existence. Naturally, it is full of snares and difficulties, but it is more effective. That is to say, instead of ceasing to love because one loves wrongly, one must cease to love wrongly and want to love well.

For instance, love between human beings, in all its forms, the love of parents for children, of children for parents, of brothers and sisters, of friends and lovers, is all tainted with ignorance, selfishness and all the other defects which are man’s ordinary drawbacks; so instead of completely ceasing to love – which, besides, is very difficult as Sri Aurobindo says, which would simply dry up the heart and serve no end – one must learn how to love better: to love with devotion, with self-giving, self-abnegation, and to struggle, not against love itself, but against its distorted forms: against all forms of monopolising, of attachment, possessiveness, jealousy, and all the feelings which accompany these main movements. Not to want to possess, to dominate; and not to want to impose one’s will, one’s whims, one’s desires; not to want to take, to receive, but to give; not to insist on the other’s response, but be content with one’s own love; not to seek one’s personal interest and joy and the fulfilment of one’s personal desire, but to be satisfied with the giving of one’s love and affection; and not to ask for any response. Simply to be happy to love, nothing more.

If you do that, you have taken a great stride forward and can, through this attitude, gradually advance farther in the feeling itself, and realise one day that love is not something personal, that love is a universal divine feeling which manifests through you more or less finely, but which in its essence is something divine.

The first step is to stop being selfish. For everyone it is the same thing, not only for those who want to do yoga but also in ordinary life: if one wants to know how to love, one must not love oneself first and above all selfishly; one must give oneself to the object of love without exacting anything in return. This discipline is elementary in order to surmount oneself and lead a life which is not altogether gross.

As for yoga we may add something else: it is as I said in the beginning, the will to pierce through this limited and human form of love and discover the principle of divine Love which is behind it. Then one is sure to get a result. This is better than drying up one’s heart. It is perhaps a little more difficult but it is better in every way, for like this, instead of egoistically making others suffer, well, one may leave them quiet in their own movement and only make an effort to transform oneself without imposing one’s will on others, which even in ordinary life is a step towards something higher and a little more harmonious.