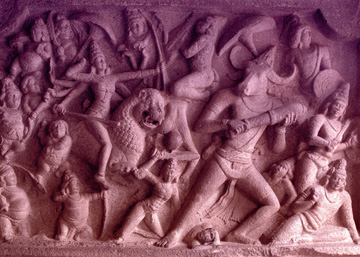 There is an inner man and inner woman in each individual. One of the aims of human development is to achieve an inner marriage between these two psychological poles of our being. This article examines the process of this inner marriage in a feminist perspective.

What is the highest ideal of feminism? It cannot be a swing towards a perpetual domination of the “better half”, though a certain amount of temporary predominance of the feminine power is needed to restore the imbalance of centuries. But ultimately the goal of feminism has to be harmony and balance between the two orbs of humanity, both outwardly, and more importantly, inwardly. In other words there must be an inner marriage between the masculine and feminine psyche and as a result or spontaneous expression, an outer equality and harmony in the material, economic and social spheres. Here comes an important insight of tantric psychology.

Accordingly to tantras, every human being is psychologically androgynous, an Ardhanareeshwara or a Shiva-Shakti. No human being, whatever may be the gender of his body, is entirely a woman or a man in his inner being. There is an inner man in every woman and an inner woman in every man though those who have a feminine or masculine body may have a natural and inborn affinity or inclination for corresponding qualities or values.

In Tibetan tantras, the esoteric sense of the sexual symbolism is interpreted as the union or marriage between this inner man and women, the Shiva-Shakti in the individual. But what is precisely, the nature of this inner Man and Woman? In psychological terms, every human being, man or woman, has in his inner nature complementary urges, qualities, faculties and powers, like for example the urge for power and the urge for love, intellect and emotion, activity and passivity, conception and execution, reason and intuition, gentleness and aggression, individualism and collectivism, concentration on the self and caring for others etc. Traditionally woman (or feminine nature) is considered to be predominantly emotional, intuitive, pragmatic, passive, caring, soft, more other-centric than self-centric. On the other hand, Man (or masculine nature) is considered to be predominantly mental or intellectual or rational, aggressive and dominating, and more egocentric than altruistic. The modern scientific mind tends to dismiss these traditional conceptions as something out-of-date and irrelevant for the present times. But there is an element of truth in both these traditional notions as well as modern objections to it.

The truth behind the traditional notion is that Man and Woman are two complementary poles of existence. In their evolutionary self-expression in life each follow his/her own unique nature and qualities or swadharma, as it is called in Indian thought. The truth behind the modern conception is that these qualities are not something rigid and fixed, but something dynamic and evolving, changing according to the evolutionary needs, conditions and aims of the individual and the social environment. The uniqueness of the feminine or masculine nature lies in an essential mode or state of consciousness, (swabhava), which manifests itself in a set of qualities that are the natural and spontaneous expression, (swadharma) of that essential mode of being. For example, the unique and essential swabhava of feminine nature may express itself through a set of qualities like a predominantly emotional and intuitive nature, passivity, caring, gentleness, grace, beauty, motherhood etc. which are its natural and spontaneous self-expression. In fact, the essential feminine or masculine swabhava is a spiritual and experiential reality, which cannot be precisely defined in mental terms. We may say roughly that a feminine swabhava is an inner state of consciousness in which all the feminine qualities are fused together in a single experience of an essential feminity, which is more than the sum of its qualities. This essential feminity is perhaps not confined to human species but embraces all creation, including the non-human worlds, tending towards the universal consciousness of Nature. Tony Fohoff, A woman-environmentalist studying whales, describes her remarkable experience when she looked into the eyes of a whale. She writes:

“When her eyes gazed into mine… the depth of her transcended species. I felt bonded with her as a female, as a daughter, a mother and a grandmother, even though I do not have children of my own. It was as if we related, which was truly, and uniquely feminine. This was the first time I have been so acutely aware of my gender in relating to a member of another species.”

However, as we have said earlier the essential feminine swabhava is not rigidly confined to a set of feminine qualities; it is something deeper and beyond the qualities through which it expresses itself in life. It can express itself through other qualities also which belongs to the masculine swadharma. And this may be sometimes necessary for evolutionary development of women in her inner as well as outer life. For example in our present male dominated mental civilization women has to develop her intellectual and rational faculties and also has to be a certain extent aggressive and ambitious to progress in her outer economic and social life. And this progress, when it is achieved in the right way without losing entirely her feminine swabhava, helps in her inner growth also by making her conscious of the inner man within every woman. And this inner marriage between the inner man and woman within every individual is one of the tantric ideals of self-development.

When we examine the evolutionary trends of human life in our modern age, we can see that it is moving towards an integral perfection in which the whole expresses itself through each part in a unique way within the individual as well as the collectivity. This means, in the domain of women’s development, every woman has to become conscious of and develop the inner man within her and harmonise him with her in born feminine nature. To achieve this she has to become conscious of and express the masculine qualities and powers in her, not in the way man does, but according to her own unique feminine swabhava. This is not a mere subtle philosophical speculation but a psychological fact and a practical possibility, which can be noticed by any discerning observer of human life and also confirmed by modern studies and research. Let us take for example, the function of wielding power and authority, which was traditionally a male domain because it is considered as a uniquely masculine quality. But a study by Judy Rosener in Harvard Business Review has found that woman managers exercise power in a very different way from that of male managers. While male managers use mainly their authority, position, hierarchy and manipulative politics to enforce their decisions, women manager use less of their authority and position and more of their personal charisma and personal relationship to carryout their decisions.

Similarly when a well-developed feminine personality expresses masculine qualities, the expression is likely to be very different from that of man. For example while a mentally well-developed male psyche delights in using thought and reason for transcendental and abstract speculation or in a disinterested pursuit of ideas for its own sake, a developed female psyche tends to use thought and reason mainly for arriving at practical conclusions for the pragmatic organisation of life. Even the quality of aggression can be expressed in a softer feminine way. The difference between the male and female aggression was depicted with great beauty in the Mahishasura Mardhini “slayer of the Buffalo demon” sculpture in Mahabalipuram, in India. The asura, the demon in the sculpture represents the grossest and the extreme form of male aggression, an unbridled brutal force of animality, with the head raised in an insolent violence. The goddess figure in the sculpture represents the highest form of female aggression, striking the demon, but with an exquisite feminine grace, and a slight smile in her face.