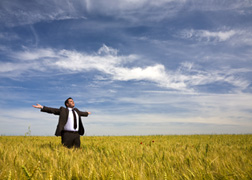 The modern corporate world is suffering from a deficit of wellness, overflowing with wealth but empty of health. Opinion Research of Princeton, New Jersey has found “largest incidents of heart attack or stroke occurs on Mondays” because, according to a Gallup’s annual poll, “80% of employees dread returning to work on Monday mornings.”

In a poignant front-page story, a leading Indian business magazine reports, “An alarming number of BPO workers are sinking into a world of crime, drugs and promiscuity. Its an unprecedented workplace phenomenon that’s testing their employers”. A revealing anecdote in this report is the story of a BPO employee, Arnab who becomes a drug addict and finally dies of a drug overdose. According to his colleague and friend Partho, the BPO management was well aware of Arnab’s addiction but decided not to interfere since he was a top performer! But why do they get into drugs? Partho answers: “There is so much pressure from the management to meet numbers and after getting abused so often by the bosses, you tend to make up your self-esteem by drinking or using drugs whenever you can”.

What is the problem behind this world of stressed-out, unhappy workers? One of the major factors behind this deficit of wellness in the corporate world is a too heavy emphasis on performance. In a pragmatic, competitive and result-oriented institution like business, performance-orientation is a legitimate need. But it must be a performance, that which is worthy and sustainable. What is the use of a peak performance that leads to loss of health, character and degeneration of the individual and communal life? But, unfortunately a large part of the modern corporate world fosters such a shortsighted culture of performance.

The Body, Mind and Soul of the employee are the source of performance, creativity and innovation. If they are sick and tormented or in a state of disorder and conflict or constantly in a state of stress, tension and anxiety, there cannot be any true or lasting creativity or performance. It may be possible to generate a certain amount of extra innovation and creativity from the employees through a “pressure-cooker” environment made of stretched-targets, and a motivation system, which demands, compels and rewards innovation and punishes the uncreative and uninnovative. But without an equal attention to human well-being, whatever creativity, innovation or productivity generated in such an atmosphere becomes unsustainable. The excessive stress, anxiety and tension of the atmosphere will have its toll on the health and well-being of the employee which, in the long-run have its adverse effects on productivity and performance. This is not rocket science but simple and elementary common sense. But sometimes, individually and collectively, we don’t listen to our common sense and follow the path of non-sense blinded by the lure of short-term gains. And to get back to the simplicity of our common-sense we need painful experiences, quotations from authorities, elaborate reasoning and citations from latest research!

So enduring performance depends on sustained human well-being. This feeling or experience of wellness should not be confined to the body but has to be integral which means it has to embrace the whole being: body, mind, heart and soul. And the approach to wellness should not be merely to cure or prevent sickness, but aim at a positive and constant improvement in health through a progressive harmony and integration of the whole being, until as Sri Aurobindo states in exquisite muse: