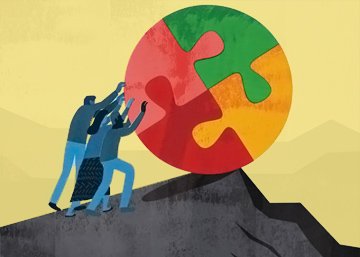 A business organization is undoubtedly an integral part of the economic life of a community. But it is not exclusively an economic entity; it is also a social organism or a community. This idea is not something new. In fact, this is the core concept of some eminent management thinkers such as Mary Parker Follett and Rosebet Mass Kanter. The Economist in a series of profiles on management theorists describes Rosebet Mass Kanter as “Kanter-the-Guru still studies the subject with a sociologists eye, treating the corporation not so much as a micro-economy, concerned with turning input into output, but as a mini-society bent on shaping the individuals to collective ends.” This is an idea with an immense pragmatic potential for unlocking the creative energy of a community as a whole.

Modern business is not merely a techno-economic system. It is a great human enterprise with not only a techno-economic dimension but also social, political and cultural dimensions. Every business organization is a social system with a political power structure and a set of cultural values. In other words, a business organization is a ‘Community’ and the aim of management must be to not only focus on the economic and market bottom-line but also dedicate itself to community-building. With the growing emphasis on the human side of business and ‘soft’ factors (such as human capital, vision, values, culture, teamwork, etc.), the power and importance of these non-economic and non-technical dimensions of business are bound to increase more and more and shape its technical and economic dimension. So these non-economic dimensions of business can no longer be treated as a secondary appendage to the techno-economic dimension. They have to be studied and understood in their own domain as something which is as vital to business as the economic and technological factor.

However, to realize the full creative potential of this community idea in business, the question or the problem has to be viewed in a broader perspective than ‘shaping the individuals to collective end’. The main challenge to be tackled here is the categorization of the factors that lead to a creative, harmonious and progressive flowering of a community as whole in all the dimensions of its corporate life¾economic, social, political and cultural. This means to realize the community ideal in business requires something more than economic, technological or managerial innovation and pragmatism; it requires social, political and cultural innovation and pragmatism.

What are precisely the guiding values for community development? They are the great values of the French Revolution: Liberty, Equality and Fraternity and the modern ideal of Progress. A creative and practical synthesis of these four values creates the foundation for the progressive perfectibility of a community. Modern political attempts to organize these values in nations have either failed or achieved only limited results. This is because a balanced synthesis of these values has not been found. The attempt of democratic governments to organize individual liberty resulted in loss of equality and dilution of fraternity. On the other hand, the attempt of socialistic or communistic governments to organize equality and fraternity ended in total loss of individual liberties or in colossal inefficiency and massive bureaucracies. Similarly, the great attempt of our modern age to achieve endless progress in the material and economic domains ended in ecological degradation and inner alienation in the psychological and spiritual realms.

The main cause of failure lies in the lack of sufficient attention to the inner dimension. These four values have an inner as an outer dimension. The modern endeavour has laid a more or less exclusive emphasis on the organization of these ideals in the outer economic, social and political life. But the key to an effective synthesis of these values lies in the internal realization of these values in the mind, heart and soul of people and allowing this inner realization to organize itself spontaneously in the outer life from within outwards. This means the primary emphasis has to be on a concrete, experiential realization of liberty, equality and fraternity in the consciousness of people with a predominant stress on inner progress in the mental, moral, aesthetic and spiritual dimension.

Modern business is nearing its saturation point in the techno-economic dimension. Endless growth in this dimension will only lead to diminishing returns. For further healthy growth, the corporate world has to strive for a quantum leap from the techno-economic to the ecological and psycho-social dimension.