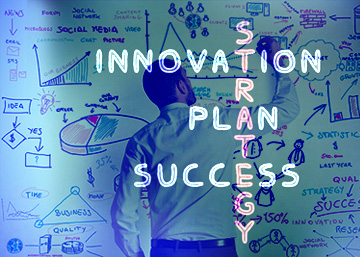 There can be many perspectives on the aims of strategy. Growth, customer satisfaction, coping with change, competitive advantage are some of the objectives of strategy. However, as the corporate environment became intensely competitive, competitive advantage has emerged as the primary aim of the traditional approach to strategic thinking. The concept of competitive advantage is a very popular idea among strategic thinkers in Management and there is a voluminous mass of literature on the subject. According to Michael Porter, who pioneered the concept, there are two ways in which firms can gain competitive advantage: cost leadership and differentiation. Cost leadership means, “offering lower prices than competitors for equivalent benefits”. Differentiation means, “Providing unique benefits that offsets a higher price” and which the competitor cannot imitate. Cost leadership can be achieved by raising operational efficiency and productivity through better technology, or management techniques like TQM or bench marking or lowering the quality of the product.

However, the new trends of thought in corporate strategy are moving towards a less competitive and a more creative approach to strategy. According to this new thought on strategy, a too heavy emphasis on capturing more and more of the market share or beating the competitor on a given set of variables leads to fierce red-hot competition, which doesn’t lead to any substantial gain for any of the competing players. So, even Michael Porter, in his later thinking was critical of an exclusive emphasis on competition and market share. Pointing out the disadvantage of such an approach, Porter states,

Similarly, competing on the basis of better operational efficiency in terms of cost, speed, quality, applying various management techniques like reengineering, TQM, will also be not very effective in the future, because these efficiencies can be quickly and easily replicated. As the eminent strategic thinker, Gary Hamel explains:

“Most of what companies have been doing for the past decade has had an internal focus which will not be effective in the future. The restructuring and the reengineering have been about how do we get better internally. Companies have been working to close performance gaps along known parameters of competitiveness. That’s the foundation of benchmarking: Let me go out and see who is best in class and make sure I’m at least that good. I would argue there is a substantial difference between bench-marking and path-breaking between improving the capabilities of the organization and creating fundamentally new markets. And it is only the latter that will in the long-term, produce new wealth. Simply catching up to where others have been is necessary to stay in the game, but the winner will be those companies who will be able to invent fundamentally new games.”

Another distinguished management thinker C.K. Prahalad, echoing the views of Gamel, states that success in the future world depends on “continually changing the rules of competition, … defining new ways of doing business, pioneering new product concepts, building new core competencies, creating new markets, setting new standards and challenging their own assumptions.” Both Prahalad and Gamel argue that success for both newcomers and industry incumbents hinges upon the capacity to avoid competition, which means not to position against the competition but rather to go around it. So the new trends in strategic thinking are not in favour of head-on competition but suggest a ground-breaking surpassing or bypassing of competition in a new creation, which satisfies a dormant need which did not exist or not manifest before.

This emerging trend in strategic thinking is not a new theory. Many companies in the past and present have successfully conceived and executed such a leap in strategic thinking. Ford’s first low-cost car Model T, and Apple’s desktop computer are examples of such a breakthrough thinking in strategy. This brings us to the question; can such ground-breaking strategies be systematically conceived and executed? Two eminent management thinkers, W. Chan Kim and Renee Maubrogne, answer in the affirmative. In their brilliant and well-written book, they present a systematic and practical framework which tells managers “How to create uncontested market-space and make the competition irrelevant”. Kim and Mauborgne call this approach as “Blue Ocean Strategy” contrasting with the traditional approach of head-on competition which they call as “Red Ocean Strategy”. Red ocean strategies tries to beat the competitor within the existing market or industry, within the existing demand and by retaining the existing customer, using traditional methods of cost, operational efficiency or differentiation. On the other hand blue-ocean strategy makes no attempt to engage the rival companies in a head-on competition within the existing market, industry, demand, or customer-base. It aims at making the competition irrelevant by creating new market, new demand and new customer or in other words moves around or away from the existing market-space to an altogether new market-space. As Kim and Mauborgne explain the essence of blue ocean strategy:

“Red oceans represent all the industries in existence today. This is the known market-space. In red oceans industry boundaries are defined and accepted and the competitive rules of the game are known. Here companies tries to out perform their rivals to grab a greater share of existing demand. As the market space gets crowded prospect for profit and growth are reduced products become commodities and cut-throat competition turns red-hot and bloody. Blue oceans are defined by untapped market-space, demand creation and the opportunity for highly profit growth… in blue-oceans competition is irrelevant because the rules of the game are waiting to be written.”