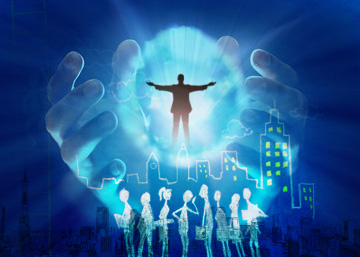 How to convert the vision into action and realisation.

There is at present a large body of literature on the art and science of communication. It is now recognized that for effective communication it is not enough to convey the idea to the thinking mind of the audience, but more importantly, the idea has to catch the interest and attention of instincts and emotions of people. To do this, the idea has to be delivered in the forms of images, symbols and stories. For example, recently there was an interesting article in Harvard Business Review by a Hollywood script-writer on how to present a proposal or an idea in the form of a story. However, the ultimate test or measure of effective communication is not a change in thought or even in the feeling but in action and behaviour; it should induce action on the lines indicated by the Idea. Ideally, this action should be voluntary and self-motivated, without any external compulsion or imposition through power and authority, reward and punishment. But in practice, there can be a soft, gentle and non-assertive persuasion through appropriate forms of communication, incentives and active support of the management to the idea.

The Idea may be presented in such a way that it is offered to the mind of individuals and the group not for acceptance but for consideration, inviting suggestions as well as criticism, but providing sufficient encouragement and incentives for arriving at a consensus. In other words, the idea has to be diffused and established in the material environment through collective contemplation and consensus. The other factor which enhances the appeal of the idea and diminishes resistance is to communicate with clarity and conviction the moral and rational basis of the idea with an emphasis on the immediate and long term benefits of the idea to the individual and the group.

Once the idea gains the acceptance of the majority of the group, the next step is to provide appropriate forums for action, implementation and execution. Here the most effective strategy would be somewhat like this. The management will provide the broad and general guidelines, coordination, and monitoring, corrective direction and keep the sense or awareness of the whole in each part and activity. But most of the initiative for action and execution should come from the field executive, the grass-root leader and the people, gathering together in many groups or teams around target-oriented tasks or project, with each group contributing its share for the progressive realization of the idea. For example, in Mind-tree, software consulting firms in India, knowledge-management systems are organized on these principles of free and voluntary groupings. As Subroto Bagchi, co-founder of Mind-tree explains:

“A work place is a social microcosm. In it, people learn best, when the learning is voluntary. Consequently we created a Knowledge Management (KM) Organization. The KM Organization built more than thirty communities of practice, an entirely volunteer-driven effort which focused on human-capital management. They chose their own areas of interest, created their own agenda, choose their own leaders, decided on when and where they would meet. The responsibility of the management is to provide physical and electronic infrastructure, coffee and snacks, some reward and recognition and generally stay out of the way.”