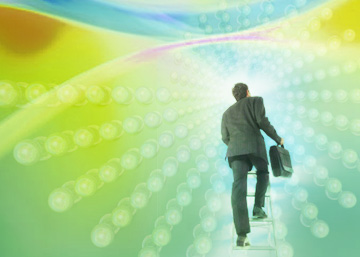 The motivational thinking can be broadly classified into two categories: ego-driven and ego-transcending motivation. This article is an attempt to arrive at an evolutionary synthesis on motivation which places human motives in an ascending spectrum.

The basic assumption of modern motivational theories is that human nature or the ego is an obstinate seeker of rewards. The task of motivation is to pamper the ego with rewards for desirable behaviour or performance and threaten it with disincentives for unwanted behaviour and performance. This assumption is to a large extent valid for the ego in our lower nature, which needs a constant dose of stimulating recognition to remain motivated. It is now recognized that money or monetary rewards no longer satisfies when the basic material needs and luxuries of the individual are fulfilled. But when the desire for money ceases to be the motivator it takes higher forms in the social and psychological level like for example, the desire for power, prestige, position, authority, status, career advancement or at least a sheer recognition in the form of a word of appreciation, a pat, or a smile or some form of fondling of the child of vanity in us!

Even the ideal of self-motivation can be full of ego without any moral or spiritual element in it; it may be based on the narrow personal fulfilment or happiness of the ego taking joy in a self-actualising work. So the self-motivated self-actualiser can be as ego-centric, or even more, as those who are supposedly in the lower levels of motivation. However, the self-motivated individual can be considered as at a higher level of motivation than the one who is driven exclusively by external motivators.

But, as Sri Aurobindo points out “ego is the helper and ego is the bar”. So modern motivational theories are valid for those who are in that stage of evolution where ego is the helper in their evolutionary progress. At present, the number of people in this stage of development may be very large or even a majority. But there are already a growing number of people who are seeking for an inner moral and spiritual fulfilment in work and their number is likely to increase and multiply with the rapid spiritual awakening of humanity in the future. And for this growing group of seekers of inner fulfilment, modern motivational theories and practices based on ego may not be entirely effective. Because many of them may be in a higher stage of development when ego is not a helper but an obstacle to their further development. This higher level of inner fulfilment comes not by nurturing the ego and remaining within its narrow confines but by rising beyond the ego into the vastness of a higher and a more universal consciousness.

So the need of the future is not an ego-driven motivation but an ego-transcending motivation. Here comes the importance of the Indian spiritual paradigm on motivation.

The ancient Indian thought recognized all the ego-motives of the modern motivational theories and viewed them as some of the aims of life. But the Indian seers also perceived a higher nature in man with moral and spiritual motives, which can uplift the human being beyond the motives of his physical and vital ego to a higher level of motivation, fulfilment and creativity. The key to this higher motivation lies in that higher need or urge in man for self-dedication, service or surrender to a moral cause or spiritual ideal which transcends the self-interest of the ego. The path to this higher motivation is not by nurturing or flattering the ego but by loss of ego, partially through moral self-dedication and fully in a spiritual consciousness.

But how or in what way this ego-transcending motivation is superior to the ego-driven motivation? In the Indian spiritual perspective, the true self of a human being or the true individual is not the ego but a universal, eternal and unconditioned being, consciousness, and energy with an inherent and eternal delight in it. Ego is only a temporary and conditioned formation which limits, confines and veils the true self of the individual and prevents it from coming into contact with his higher potentialities. The ego limits the consciousness, creative energy and the inherent delight of our being. So loss of ego means, in proportion to the loss, expansion of our being and consciousness and as a result increases of understanding, energy, sympathy and delight of being. And when there is a total annihilation of ego, our consciousness, is projected into the infinite and universal consciousness of our highest self. But this applies only to those who are in the higher levels of development with a well-developed and individualized ego. For those who are in the lower stages of evolution with a weak and underdeveloped ego, if they try to prematurely dissolve their ego, they may sink into the subconscious instead of raising to the super-conscious. For we have to first develop our ego and raise it to a certain level of self-consciousness before it can be safely dismantled into higher levels of consciousness beyond ego.

There are two stages in our progress from ego-driven motivation to the higher ego-transcending motivation. The first stage is self-dedication or service to a mental, moral or social ideal beyond the desires and interests of our physical and emotional ego. The second stage is a spiritual self-surrender to a transcendent and universal Reality. The moral self-dedication does not eliminate the ego but only enlarges it or loosens or softens its knots. The ethical motive can be full of the ego of the do-gooder. As Sri Aurobindo exposes the altruistic ego with his piercing Yogic insight.

“Even charity and altruism are often essentially egoistic in their immediate motive. They are stirred by the discomfort of the sight of suffering to the nervous system, or by the pleasurableness of other’s appreciation of our kindliness or by the egoistic appreciation of our own benevolence, or by the need of indulgence in sympathy. They are philanthropist who would be troubled if the poor were not always with us, for then they would have no field for their charity.”

But the moral motives and the ethical discipline are indispensable preparatory stages to the higher levels of spiritual motivation which can be realized only through a ruthless elimination of ego and desire from every level of our being. Such a total elimination of ego can be accomplished only through a psychological and spiritual discipline of vigilant self-awareness, or deep meditation or selfless work or total surrender to a higher divine Power.