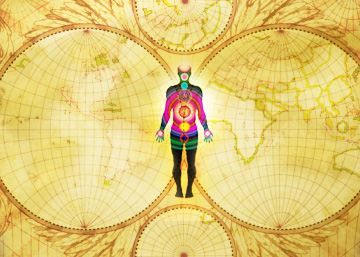 The popular conceptions of “spiritual” East and the “Materialistic” West, stated in dogmatic exclusive terms, are a half-truth and a prototype. The West has its periods of rich spiritual flowerings, like for example the era of Christian Mysticism with its great mystics like St. John of the Cross, Meister Echart, St. Teresa of Avila. Similarly East has its materialistic and sensuous tendencies like for example Kama Sutra, philosophy of Carvaka. However, when we examine the history of East and West, we will see that in the East most of the best minds gravitated towards an inward looking religion, philosophy and spirituality and in the West towards an externalized science, technology and organization. This indicates two distinct tendencies or two orbs of human consciousness with complementing temperament and genius. Both are needed for the integral perfection of human life. This article is a message of Sri Aurobindo to the West, sent on15th August 1949, which is his birthday.

Interestingly we would like to inform our readers that, Sri Aurobindo gave the logo to the Institute of Chartered Accountant of India, which was adopted by the council of the institute on 15th August 1949. What a coincidence!

I have been asked to send on this occasion of the fifteenth August a message to the West, but what I have to say might be delivered equally as a message to the East. It has been customary to dwell on the division and difference between these two sections of the human family and even oppose them to each other; but, for myself I would rather be disposed to dwell on oneness and unity than on division and difference. East and West have the same human nature, a common human destiny, the same aspiration after a greater perfection, the same seeking after something higher than itself, something towards which inwardly and even outwardly we move. There has been a tendency in some minds to dwell on the spirituality or mysticism of the East and the materialism of the West; but the West has had no less than the East its spiritual seekings and, though not in such profusion, its saints and sages and mystics, the East has had its materialistic tendencies, its material splendours, its similar or identical dealings with life and Matter and the world in which we live. East and West have always met and mixed more or less closely, they have powerfully influenced each other and at the present day are under an increasing compulsion of Nature and Fate to do so more than ever before.

There is a common hope, a common destiny, both spiritual and material, for which both are needed as co-workers. It is no longer towards division and difference that we should turn our minds, but on unity, union, even oneness necessary for the pursuit and realisation of a common ideal, the destined goal, the fulfilment towards which Nature in her beginning obscurely set out and must in an increasing light of knowledge replacing her first ignorance constantly persevere.

But what shall be that ideal and that goal? That depends on our conception of the realities of life and the supreme Reality.

The Need for Synthesis

Here we have to take into account that there has been, not any absolute difference but an increasing divergence between the tendencies of the East and the West. The highest truth is truth of the Spirit; a Spirit supreme above the world and yet immanent in the world and in all that exists, sustaining and leading all towards whatever is the aim and goal and the fulfilment of Nature since her obscure inconscient beginnings through the growth of consciousness is the one aspect of existence which gives a clue to the secret of our being and a meaning to the world. The East has always and increasingly put the highest emphasis on the supreme truth of the Spirit; it has, even in its extreme philosophies, put the world away as an illusion and regarded the Spirit as the sole reality. The West has concentrated more and more increasingly on the world, on the dealings of mind and life with our material existence, on our mastery over it, on the perfection of mind and life and some fulfilment of the human being here: latterly this has gone so far as the denial of the Spirit and even the enthronement of Matter as the sole reality. Spiritual perfection as the sole ideal on one side, on the other, the perfectibility of the race, the perfect society, a perfect development of the human mind and life and man’s material existence have become the largest dream of the future. Yet both are truths and can be regarded as part of the intention of the Spirit in world-nature; they are not incompatible with each other: rather their divergence has to be healed and both have to be included and reconciled in our view of the future.

The Science of the West has discovered evolution as the secret of life and its process in this material world; but it has laid more stress on the growth of form and species than on the growth of consciousness: even, consciousness has been regarded as an incident and not the whole secret of the meaning of the evolution. An evolution has been admitted by certain minds in the East, certain philosophies and Scriptures, but there its sense has been the growth of the soul through developing or successive forms and many lives of the individual to its own highest reality. For if there is a conscious being in the form, that being can hardly be a temporary phenomenon of consciousness; it must be a soul fulfilling itself and this fulfilment can only take place if there is a return of the soul to earth in many successive lives, in many successive bodies.

The process of evolution has been the development from and in inconscient Matter of a subconscient and then a conscious Life, of conscious mind first in animal life and then fully in conscious and thinking man, the highest present achievement of evolutionary Nature. The achievement of mental being is at present her highest and tends to be regarded as her final work; but it is possible to conceive a still further step of the evolution: Nature may have in view beyond the imperfect mind of man a consciousness that passes out of the mind’s ignorance and possesses truth as its inherent right and nature. There is a truth-consciousness as it is called in the Veda, a supermind, as I have termed it, possessing Knowledge, not having to seek after it and constantly miss it. In one of the Upanishads a being of knowledge is stated to be the next step above the mental being; into that the soul has to rise and through it to attain the perfect bliss of spiritual existence. If that could be achieved as the next evolutionary step of Nature here, then she would be fulfilled and we could conceive of the perfection of life even here, its attainment of a full spiritual living even in this body or it may be in a perfected body. We could even speak of a divine life on earth; our human dream of perfectibility would be accomplished and at the same time the aspiration to a heaven on earth common to several religions and spiritual seers and thinkers.

The ascent of the human soul to the supreme Spirit is that soul’s highest aim and necessity, for that is the supreme reality; but there can be too the descent of the Spirit and its powers into the world and that would justify the existence of the material world also, give a meaning, a divine purpose to the creation and solve its riddle. East and West could be reconciled in the pursuit of the highest and largest ideal, Spirit embrace Matter and Matter find its own true reality and the hidden Reality in all things in the Spirit.