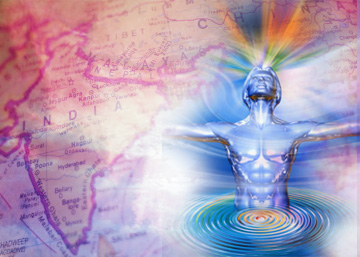 Study the history of the whole world and you will see that every high ideal you meet with anywhere had its origin in India. From time immemorial India has been the mine of precious ideas to human society: giving birth to high ideas herself, she has freely distributed them broadcast over the whole world.

India has a crucial role to play in the future progress of Science, says this Nobel Laureate in Science.

I am convinced that the Indian science community has a very essential role to play in the future progress of science. India is in a unique position in many respects:

(i) India is the source of some of the most profound schools of thought of mankind with the Mahabharata and the Bhagavad Gita expressing Hindu philosophy and the Tripitaka summarizing the Buddhist view. Both philosophical systems with their respect for all beings and expression of compassion may be fruitful sources for a universal ethical system.

(ii) India is a universe by itself, not only in numbers of population, but also being in parts an ultramodern computerized country, and in other parts showing all signs of a developing, partly even medieval country with virtually all conceivable problems of a traditional society exposed to the influences of modern industrialism. An ethical system that works in India should work everywhere else as well.

(iii) India has a well developed academic community with a surplus of highly creative scientists, perhaps with a special inclination towards the more theoretical aspects of science and maintaining still a link to the ancient Indian culture.

I am convinced that India could become once again the cradle of a new school of thoughts that may significantly influence the fate of the globe during the third millennium. Perhaps the contributions of India to nuclear power technology and space science will turn out to be irrelevant, but the contribution towards a new ethical foundation could be turning the wheel of history in the proper direction.

I certainly do not want to advocate that the scientists should stop doing research and spend all their time contemplating on ethics and philosophy of life. Perhaps, you remember the ancient Hindu role model for a high-caste male, a model that probably has seldom been practiced to its full extent. Life is supposed to consist of four stages: (1)

(i) As a student, one is learning from a knowledgeable teacher.

(ii) As a householder, one is founding a family and is active in society, industry, or academics.

(iii) As a forest dweller, one retreats with the wife into the forests, meditates on the world and tries to make sense out of the previous experiences, and seeks one’s own release from the world.

(iv) As a sanyasin, finally, one leaves everything, including the wife behind and wanders as a beggar throughout the country, meditating, and seeking to achieve a state of mind that transcends the world.

Obviously, this model is hard to follow in our time. Where would you find all the necessary forests? But still, it neatly summarizes our tasks in life.

Richard Robert Ernst (born August 14, 1933) is a Swiss physical chemist and Nobel Laureate. Born in Winterthur, Switzerland, Ernst was awarded the Nobel Prize in Chemistry in 1991 for his contributions towards the development of Fourier Transform nuclear magnetic resonance spectroscopy while at Varian Associates, Palo Alto and the subsequent development of multi-dimensional NMR techniques. These underpin applications of NMR both to chemistry (NMR spectroscopy) and to medicine (MRI). He also received Louisa Gross Horwitz Prize in 1991.