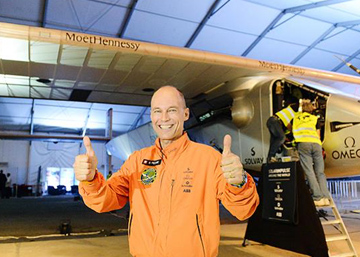 When Wright brothers invented the aeroplane and flew it for the first time, Thomas Alva Edison, the great scientist and inventor, was reported to have said that as long as it needs a runway it cannot be commercialised and would not become a mass-transport vehicle. Even someone like Edison was unable to gauge the potentialities of a great innovation and underestimated the innovative capabilities of the human mind to adapt itself to changing needs and situations. Many great innovations, when they are presented to the public for the first time, appear like a technical marvel or something from a sci-fi movie,out-of-tune with the present condition or commercially unviable. But look at it after a few decades; it becomes part of our life!

Recently, two such innovations were reported in leading dailies in India. These innovations have a great potential for solving our transportation problem in a sustainable manner.

First is a solar-powered aeroplane. According to some recent research, flying machines zooming in the sky were much more polluting than the machines trotting on the road. But even in poor countries like India, air travel is breaking into the bottom of the pyramid and more and more people from the lower income groups are now travelling in air. So, solar powered plane will be a great boon to our sustainable progress. Recently a fully solar powered plane driven by its pilot-innovators landed in the Ahmedabad airport in India. The pilots and innovators,Bertnand Picard and Andre Brushberg, are on a globe-trotting expedition for demonstrating the possibility of a solar-powered vehicle in the air. Regarding its commercial viability Piccard and Barshberg say:

“When the Wright brothers were flying planes, they did not have the technology to fly passengers. It happened after nearly two decades, but they had the pioneering spirit to open the door and show what is possible”

However, when I contemplate on the commercial viability of this innovation, my mind murmurs. ”Oh, even on the roads, there are only a few solar powered vehicles, which is still too far from becoming a commercially viable transport, how can a solar-powered plane become viable in the near future.” Don’t blame me for my conservative scepticism. As I mentioned earlier in the beginning of this article, I am in great company. Even Edison was sceptical about the future possibilities of the aeroplane. Let us hope that just like Edison was proved wrong, my scepticism was also overruled by a galloping progress in technology to make the solar powered plane an integral part of the transportation system of our planet.

This brings us to the question what are the main obstacles preventing rapid progress in making renewable, environmental friendly energies, like solar, commercially competitive with traditional, polluting energies like coal or oil? The central obstacle seems to be lack of a missionary, focussed attention on developing the renewable energies, which in turn may be due to the low price of oil. As the American journalist and author Milton Friedman points out that as long as oil is available cheap, there won’t be sufficient motivation among nations to focus on alternative sources of energy.

The second innovation is an automated rapid transit system, suspended in elevated magnetic tracks2. The system consists of light weight, two-person, driverless vehicles suspended above the road in magnetic tracks. Passenger can hop into a pod and dial the number of a station they want to go and zoom into his or her destination at super- fast speed. When I read the first few para of this report, my spontaneous reaction was “Oh it is too high-tech and futuristic for India.”But when the top executives of Sky Tran, makers of the system, describe the system, and how it was very relevant to India, I felt that it was not that remotely futuristic as it appear to be. Ankur Bhatnagar, Vice president of SkyTran India says:

“We expect India to be one of our biggest markets” and gives the following reasons why it is relevant to India.

According to Bhatnagar, the main obstacle is not technological but political “it is very difficult for a new technology to break in as politicians get money from companies to keep the status quo.” However, even if the political will is not corrupt, it requires much courage to go for a new untested technology which may or may not work. Those governments or nations which display this courage may be heralding a new era in transportation. Israeli government has displayed that courage in willing to experiment with the new technology of Sky Trans.

According to Jerry Sanders, CEO and chairman Sky Tran, the first phase of the project in Telaviv in Israel will be up and running within 6-8 month, financed by Israeli government and supported by the aerospace companies in Israel for building the vehicles. The success of this project in Israel will help the company in convincing leaders of others nations to test this new form of transportation. Apart from Israel, Sky Tran is building a demonstration project in Charles de Gaulle airport in Paris, France and also negotiating with the Government of Bihar and Kerala in India for pilot projects.

When this new technology becomes entirely operational and viable on a large scale , it will add one more tier to the transportation system of our planet, in between the aeroplanes zooming in the sky and two or four wheeling trotting on the road , a third and middle tier whizzing above the roads in elevate magnetic tracks. If all three tiers can be powered by renewable sources of energy we will be progressing safely and surely towards solving our transportation problem in a sustainable path.