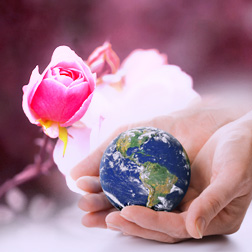 Philanthropy and Charity are great civilizational forces. They are part of our higher instincts and a productive force for our inner growth as well as our outer progress. The essence of philanthropy is the Act of Giving which is in harmony with the higher laws of life and Nature.

What are these higher laws? The modern science in physics and ecology, has perceived a connectedness and interdependence in the physical and biological Nature. The ancient Indian seers perceived a unity of consciousness as the foundation of all creation. What are the practical consequences of this law for behaviour, conduct and action? In a life-system governed by the laws of unity and interdependence, growth, success or happiness in the long-term goes not to the selfish and possessive taker but to the unselfish and ungrudging Giver. Grow by giving is the great law of Life.

The concept of entropy in modern science can perhaps help us to understand better the need for giving. According to thermodynamics, a closed system is subject to the law of entropy, which means progressive degeneration. In a closed system all energies tend towards maximum disintegration in the course of time. A human system which doesn’t give freely to the larger life, of which it is a part, is a closed system subject to the law of entropy. It is the act of unselfish giving which opens the human system to the higher and positive forces of life which counteracts entropy and helps it to progress towards greater harmony and order.

Philanthropy and charity, individual and corporate, to realise their full moral and spiritual potential, have to be based on these higher laws of life. The act of giving has to undergo an inner as well as outer transformation. Externally it has to become more enlightened, discriminating and efficient, a creative deployment of resources for enhancing the inner and outer well-being of humanity and earth. Internally, it has to flow out from a corresponding inner state of giving in thought and feeling, which in turn has to be a spontaneous expression of the inner realisation of unity. This unselfish self-giving in thought, feeling and action, flowing out from a consciousness of spiritual unity, is the essence of pure, highest, universal Love. In other words, philanthropy and charity attains its highest spiritual potential when they blossom into universal Love and Compassion flowing from a consciousness of Oneness of all life.